Remember when 1080p screens were considered “full” HD? These days you can find plenty of monitors with 4K UHD resolutions, with some companies pushing the boundaries to 5K, 6K, or even 8K… but you may need two cables to actually connect some of those displays.

In the future you may be able to do it with just one. VESA has just finalized the new DisplayPort 2.0 spec with support for up to a single 16K display at 60 Hz, or two 8K displays at 120 Hz. 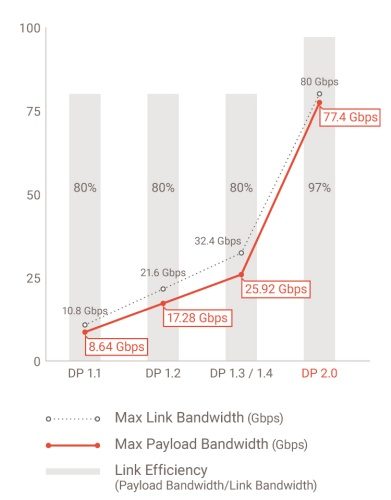 DisplayPort 2.0 has a maximum bandwidth of 77.4 Gbps, which is nearly three times as high as you could go with DisplayPort 1.4.

Among other things, that means it should support:

The standard supports both native DisplayPort connectors and Thunederbolt 3/USB-C connectors… although if you’re using a single USB-C cable for both video and data simultaneously, you’ll still be able to connect up to three 4K displays or a single 8K display (at 30 Hz).

You can read more details in the DisplayPort 2.0 announcement.