These days you can buy a $35 single-board computer with plenty of horsepower to play classic video games designed for the PlayStation or older consoles. But while you could just buy a Raspberry Pi, load up RetroPie software, and plug in some game controllers, and call it a day… sometimes it’s nice to have a game console that looks like a game console… and maybe one that packs a little more power. 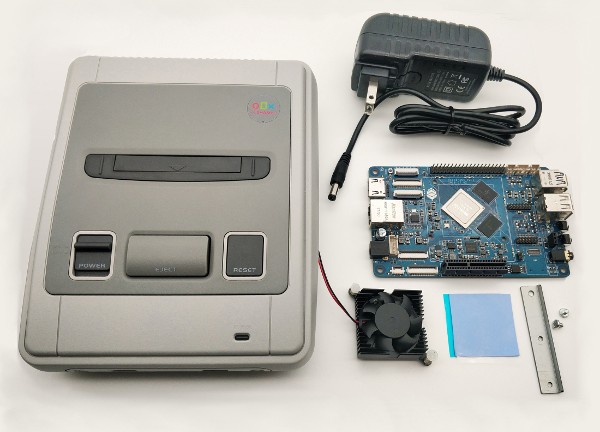 The kit lets you assemble your own retro console with single-board computer, a case with a classic SNES-like color scheme (it bears a pretty striking resemblance to the Japanese version known as the Super Famicom).

The Roshambo kit also supports optional components including fans, power supplies, game controllers, and SSD cartridges that you can plug into the top of the system like an old-school game cartridge. This allows you to store games or other data on removable cartridges, and it’s probably the coolest thing about this little retro gaming system.

There’s even an eject button that lets you pop out the SSD cartridge when you’re done with it.

The kits are designed to work with either a Rock64 single-board computer (with an RK3328 processor) or a RockPro64 (with an RK3399 chip). If you’ve already got one of those boards, you can buy just a Roshambo case for $30 (or spend a little extra to get a case + power supply or fan/heat sink).

But if you’re looking to buy everything at once, there are kits that include (almost) everything you need to assemble your own retro game console.

You’ll still need to add a microSD card for storage and an OS, but the devices support a variety of gaming-centric operating systems including Lakka TV, Recalbox, Retro Arena, and Batocera.

via CNX-Software and ETA Prime