A growing number of eReaders feature touchscreen displays, allowing you to tap the left or right side of the screen to flip through pages in an eBook. But most lack a feature that used to be common: physical buttons that you can press instead.

So the folks behind the Onyx Boox line of eReaders designed a prototype that offers the best of both worlds. The Onyx Boox Viking is a small device with a 6 inch E Ink touchscreen display. But it also has a set of Pogo pins that let you attach an optional cover/case that gives you physical page turn buttons.

Notebook Italia got to spend some time with a Onyx Boox Viking prototype at the Hong Kong Electronics Fair. 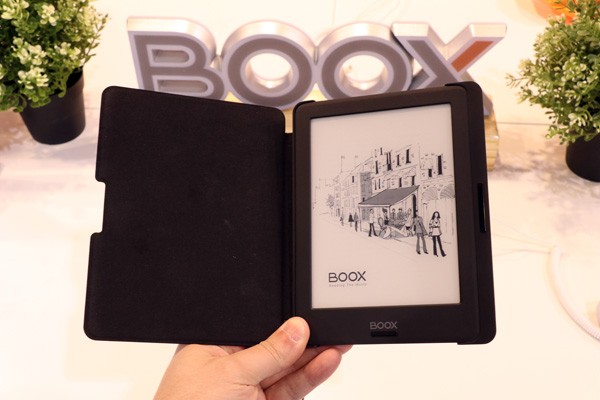 Onyx hasn’t decided whether to bring the device to market yet, but this wouldn’t be the first eReader with support for an optional case that’s more than a case — the first-gen Amazon Kindle Oasis, for example, came with a charging cover with a built-in battery.

Anyway, theoretically the Pogo pin adapter could allow Onyx to release a range of different covers or modular add-ons for the Boox Viking, including charging cases or even keyboards.

Without the cover, the eReader features pretty standard specs, including a 6 inch E Ink Carta Plus display with a front-light and adjustable color (for reducing blue light when reading at night, for example). Other specs include a 1.2 GHz quad-core processor, 1GB of RAM, and 8GB of storage. It supports 802.11n WiFi, Bluetooth 4.1, and has a USB Type-C port.

You can find more details (and pictures) at Notebook Italia.