Lenovo introduced its first “mixed reality” headsets since 2017, but like most devices designed to use Microsoft’s Windows Mixed Reality platform, the Lenovo Explorer was really more of a virtual reality headset that blocked out the real world and replaced it with a virtual one.

The company’s new ThinkReality A6, meanwhile, is a true augmented reality system. It’s designed for the enterprise market and could be used for training purposes, for fieldworkers who may need to consult documents while working on repairs, or for other situations where a head-mounted display could be more convenient than a phone, tablet, or laptop.

In other words, the ThinkReality A6 is Lenovo’s answer to Microsoft’s HoloLens platform. 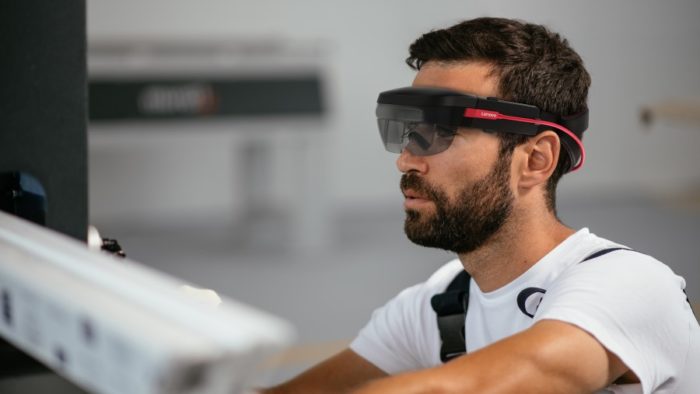 The ThinkReality A6 system includes a head-mounted display that overlays digital data on your real-world environment. It plugs into a small box with a Qualcomm Snapdragon 845 processor and Android Oreo-based software.

There’s also an Intel Movidius AI chip, a set of microphones and speakers, and support for WiFi and Bluetooth.

Lenovo says the ThinkReality A6 headset has a resolution of 1080p per eye and a field of view of over 40 degrees. It supports 3 degrees of freedom inside-out tracking, gaze tracking, gesture support, and voice recognition.

There’s a battery that should provide over 4 hours of battery life, and the system should work for users who wear eyeglasses as well as for those who do not.

Lenovo hasn’t revealed how much its augmented reality system will cost, but it should be available later this year. Given the focus on enterprise customers, I wouldn’t expect it to be cheap… or particularly useful for casual users.