It’s been almost three years since Motorola unveiled the Moto Z line of smartphones with support for optional Moto Mod add-ons that let you bring big batteries, better cameras, or louder speakers to the phones by snapping a module on the back. And it looks like the company is sticking with the idea, because Evan Blass has posted an image showing what the next model will look like. 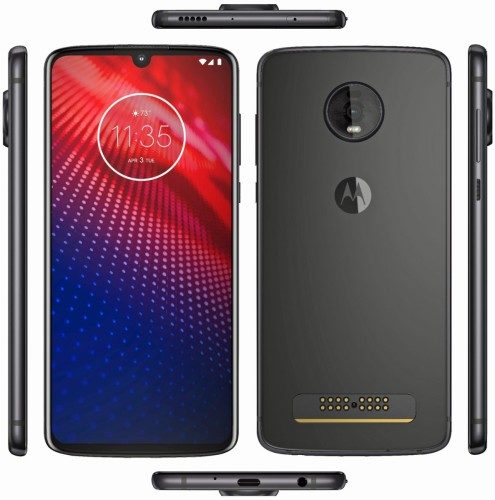 The size and shape of the phone are pretty similar to last year’s model, which is unsurprising since Motorola is aiming to keep making new phones that support existing Moto Mods.

That means there’s still a set of pins on the back of the phone where mods connect to the Moto Z4. And there’s still a large circular camera section. Interestingly, it looks like Motorola is going with a single rear camera.

It does look like Motorola may have reduced the size of the top and bottom bezels, and the new model has a small cut-out in the screen for the front-facing camera.

There’s no visible sign of a fingerprint sensor, which could hint at an in-display sensor. But it’s also possible Motorola has decided to opt for a different form of biometric authentication for this year’s Moto Z series smartphone.

As for other specs, those remain in question. In March 91mobiles reported that the Moto Z4 would feature a Qualcomm Snapdragon 855 processor, but a month later the same website claimed the phone would instead have a Snapdragon 675 chip. In both cases, the website said the phone would have a 48MP camera and support for Motorola’s 5G Moto Mod.

We may have to wait for an official announcement from Motorola to be sure whether the Moto Z4 is a true flagship or if the company is planning to offer a phone with a mix of premium and mid-range specs.