The Kingrow K1 probably isn’t the best smartphone for mobile gaming, watching videos, or framing the perfect photo… because you’d probably want a color display for any of those things, and the Kingrow K1 doesn’t have one.

What it does have is an E Ink display that’s easy to see in direct sunlight and which doesn’t draw a lot of power. Kingrow says the smartphone gets up to 2 days of battery life during normal usage, 7 days if you disable wireless and just use it for reading, and 15 days in standby.

The company unveiled the phone recently, and now it’s up for pre-order for $299 and up through a crowdfunding campaign at Indiegogo. 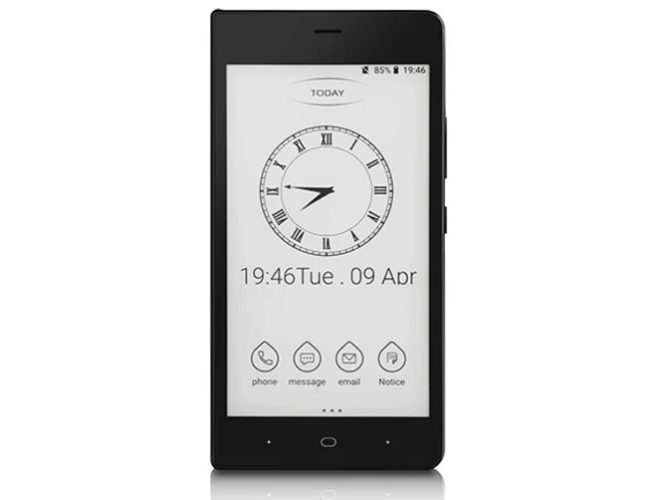 While the 5.2 inch, 1280 x 720 pixel E Ink Carta display with an adjustable front-light certainly makes the Kingrow K1 stand out, the phone’s other specs are a little underwhelming:

The prototype Notebook Italia spent time with also has a front-facing camera, but the final version isn’t expected to have one.

Kingrow also says it’s developed a custom user interface for the phone and it will ship with its own app store rather than Google Play… but Notebook Italia suggests it should support the Play Store. You just might need to install it (or another third-party app store) on your own.

Another thing to keep in mind before pulling out your wallet — Kingrow says it’ll ship the phone worldwide, but the company hasn’t listed which network bands the K1 supports so it’s unclear which wireless networks you’ll be able to use it with.