A few months ago we wrote about a $10 accessory accessory for the Raspberry Pi Zero W that that you could use to turn the tiny PC into a handheld computer (once you add a display, battery, and some other components).

Now it looks like there’s a similar (but slightly more polished looking) accessory for the full-fledged Raspberry Pi 3 Model B.

The Hyper Keyboard Pi is an experimental kit designed by Japanese developer @chinjinson that lets you build a 4.7″ x 3.9″ handheld computer, complete with a physical keyboard and game controller buttons. 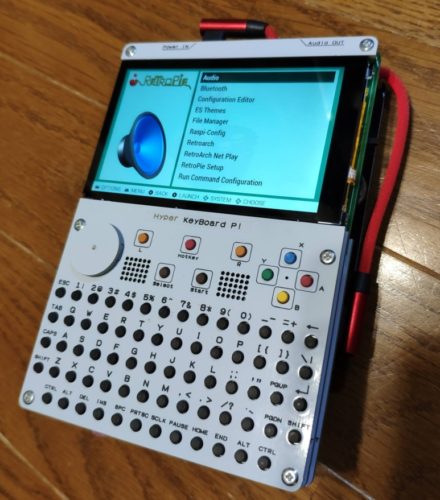 I’ve been struggling with Google Translate to find out more about the Hyper Keyboard Pi since discovering it on Twitter, but it appears to be a kit that lets you attach a few custom components to a Raspberry Pi to give the little computer a keyboard.

The kit sells for about $65 and it doesn’t include a display, battery or microSD card. You’ll need to buy those things separately, and the only supported display is the HyperPixel 4″ touchscreen display. If you have access to a 3D printer you may also want to design your own case.

Is this the most affordable way option for handheld gaming, web browsing, or media playback? Probably not. Once you add up the price of the components ($35 for the Raspberry Pi, $65 for the kit, $50 for the screen, etc), you might easily end up spending $200 or more on parts… and at that rate you’d probably be better off just getting a cheap smartphone.

But there’s still something kind of awesome about the idea that you can assemble a fully functional handheld computer using a set of off-the-shelf (and custom) components.