Google has been working on an open source operating system called Fuchsia for years.

It’s not entirely clear what it’s for, but some folks have speculated that it could one day replace Android and/or ChromeOS for smartphones, laptops, and tablets. Since it uses a custom kernel called Magenta instead of Linux, it would give Google even more control over its software than the company already has.

But despite the fact that Fuchsia is an open source project with code hosted on Github, it’s been kind of tough for users to get a good look at the operating system since it’s not easy to install on devices. A few years ago Ars Technica’s Ron Amadeo provided some early pictures of Fuchsia’s user interface. And in 2018 he managed to install the operating system on a Pixelbook.

Now a team of developers have figured out how to run Fuchsia using Google’s Android Studio Emulator. 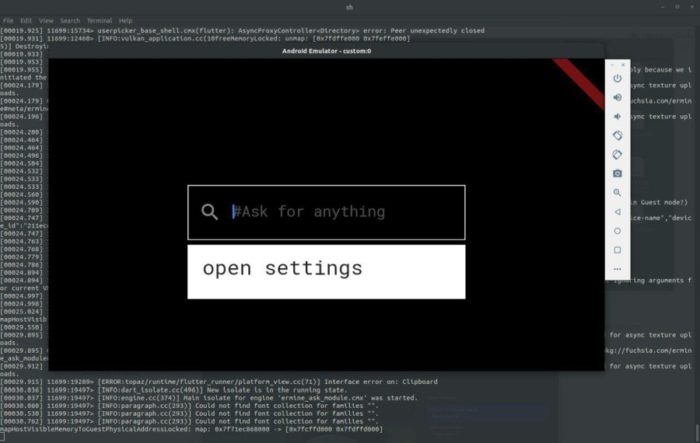 Google’s Android Emulator is designed to let Android app developers see how their software will look on various devices, and it doesn’t support Fuchsia out of the box.

But developers Greg Willard and Horus125 report that with a little elbow grease, Android Emulator build 29.0.06 or later, Vulkan drivers, and a copy of the Fuchsia source tree, you can make a few alterations and build a version of Fuchsia that can be run in the emulator.

It’s a kind of complicated, time-consuming process — so check out Willard’s blog post for step-by-step instructions if you want to follow along at home. But for as long as this method works, it provides a way for anyone to poke around at Google’s work-in-progress Fuchsia operating system using a PC. There’s no need to figure out how to load it onto a phone or Chromebook.