Microsoft’s Your Phone app for Windows 10 allows you to link an Android phone to a Windows PC so that you can see pictures from your phone on your computer, drag and drop files between devices, send and receive text messages, or mirror your phone’s display on your PC using the “Phone Screen” feature that launched in March.

At the time, Phone Screen was only compatible with Samsung Galaxy S8 and S9 series smartphones. But now Microsoft ha added support for the Galaxy S10, Galaxy Note 8 and 9, and the OnePlus 6 and 6T.

The company is also adding a new feature — the ability to view smartphone notifications on your computer. 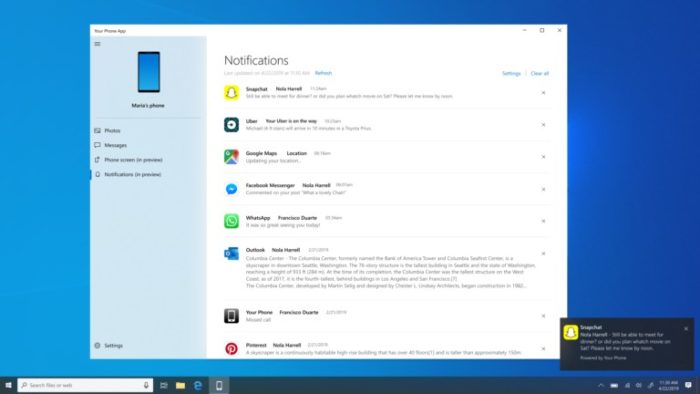 Since notifications are coming from your phone, you won’t see alerts about incoming messages if your phone is turned off. But as long as it’s on, you’ll be able to see information at a glance without unlocking your phone.

Microsoft announced support for notifications in a blog post about Windows 10 Insider Preview Build 18885, and says the feature “will gradually roll out to Insiders on 19H1 builds” of Windows 10. It’s unclear when it will be available for folks that aren’t part of the company’s Insider/beta testing program.

Other changes in Build 18885 include support for dictation in additional languages (including French, German, Italian, Spanish, Portuguese, and Chinese), and improvements for Narrator.