Once upon a time, Android apps ran on phones, and GNU/Linux apps ran on PCs. Things are a lot blurrier these days, thanks things like Chromebooks, which can run Android, Chrome OS, and Linux apps on a single device.

If you want to run Android apps on your non-Chromebook laptop, there have been ways to do that for a while… but most involve installing some sort of virtual machine and interacting with Android apps inside a complete virtual Android environment.

A few years ago the folks at Anbox introduced a solution that lets you run Android apps in a Linux environment as if they were native Linux apps. Now Collabora has a different solution that it calls SPURV.

In a nutshell, SPURV offers a way to run Android apps on a system running a GNU/Linux operating system with the Wayland display server. The software is open source and available for anyone to build from scratch… but there are currently no plans to offer it as an easy-to-install application using Flatpack or a similar package management system.

SPURV is basically a set of tools that allows you to install a complete Android operating system in a container and then provides access to a computer’s audio, graphics, and networking hardware, among other things.

The result is that you can run Android apps in windows as if they were native apps and they should support hardware-accelerated graphics, touchscreen displays, and other features.

The down side is that you’re basically running two full operating systems at once, which could take a toll on system resources and performance. 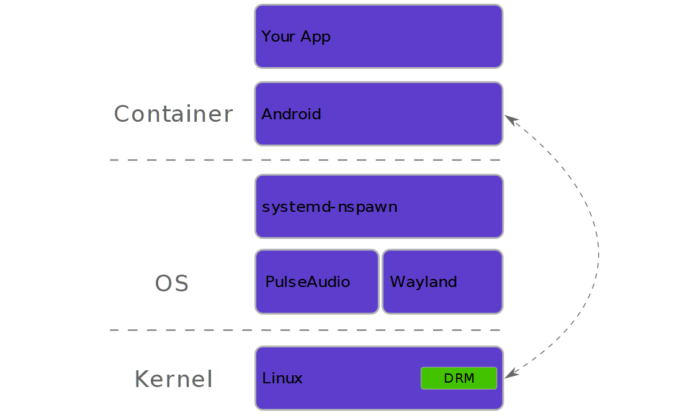 via Phoronix and Android Police