Facebook is launching two new VR headsets. As mentioned earlier today, the Oculus Rift S is an updated headset that plugs into your PC and which features a higher-resolution display, inside-out position tracking, and a more comfortable design. And the Oculus Quest is a new standalone headset that doesn’t require a computer at all.

They’re both up for pre-order for $399 starting today, and both should ship May 21st.

But it’s the Oculus Quest that’s probably going to garner the most attention at launch, because it’s not quite like anything else on the market… for better or worse. 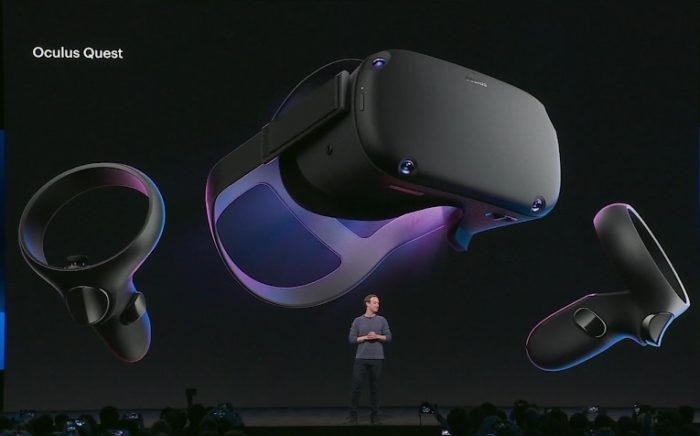 The Quest is Facebook’s second standalone headset. Last year the company began selling the Oculus Go for $199 and up. While the entry-level price was pretty attractive, that model came with a simple controller and lacked support for motion tracking.

The Oculus Quest has four built-in cameras for inside-out position tracking, which means you’ll be able to move through virtual reality experiences as you move through real space. It also comes with two handheld motion controllers, much like those you get with higher-priced, PC-based VR systems.

Facebook’s new standalone headset is powered by a Qualcomm Snapdragon 835 processor with Adreno 540 graphics and it has 4GB of RAM, which makes it a lot less powerful than any PC-based VR headset. That also means that some games and apps aren’t going to work on this model.

But with a resolution of 1600 x 1440 pixels per eye, it’s actually higher-resolution than many other headsets (although it has a refresh rate of just 72 Hz). And the Quest is a completely untethered devices, which means there are no cables to trip over and you can use the headset just about anywhere. It should get 2-3 horus of battery life.

Overall, the Oculus Quest seems like a big step up from the Oculus Go… and the lack of reliance on a PC with discrete graphics, could make the Quest a more attractive option for some potential customers.

That said, $399 isn’t exactly impulse buy territory. So Facebook and its developer partners are probably going to have to convince people that there are enough killer apps to justify spending that kind of money on a face computer.