A California-based startup got the rights to use the Palm name and revived the Palm brand last year by launching a tiny smartphone with a 3.3 inch display, mid-range specs, and Android 8.1 software with a custom user interface.

But the Palm phone was initially sold as a smartphone companion rather than as a primary device. Verizon allowed customers to share a phone number between a Palm phone and another phone, letting you grab the smaller device when you wanted fewer distractions or a smaller device that you could take to the gym or anywhere else a large phone might be more trouble than it’s worth.

Now the new Palm has announced that US shoppers can now buy the phone from Verizon either as a companion device or as a primary phone. 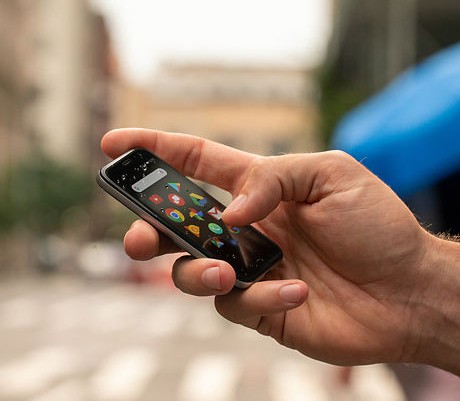 The company says battery life has also been improved through software updates, which is good news, since the phone previously received terrible reviews for its battery life. That’s not surprising since the phone has a dinky 800 mAh battery. I still wouldn’t expect the tiny smartphone to get good battery life, but better is… well, better.

For the most part the phone is the same no matter whether you’r ebuying the standalone version or buying a model to use as a smartphone companion. The biggest difference is that you now have the choice of adding the phone to your existing cellular plan or buying the phone and using it as a standalone device.

The smartphone features a 1280 x 720 pixel display (with 445 pixels per inch, since it’s such a small screen). It has a Qualcomm Snapdragon 435 processor, 3GB of RAM, and 32GB of storage. It has a 12MP rear camera and an 8MP front-facing camera.

But the phone’s key selling point is definitely its size: measuring 3.8 inches by 2 inches, it’s about the size of a business card (or rather, a small stack of business cards, since it’s not exactly paper thin).

Verizon is selling the Palm phone for $350, but if you sign up for a 2-year service contract before May 1st, you can pick one up for $200.

The wireless carrier is also selling all Palm phone accessories for half price until April 18th.