Chinese electronics company Huawei is making some of the most impressive smartphones around these days, and while Huawei is a relative newcomer to the PC space, the company’s Matebook X Pro laptops are considered by many to be some of the best Windows notebooks available.

So what’s next? Apparently a Windows on ARM PC.

The folks at Notebook Italia got an opportunity to check out the new Huawei Matebook E 2019 recently, and report that it’s a 2-in-1 tablet with a built-in kickstand, a detachable keyboard, and a Qualcomm Snapdragon 850 processor.

The Matebook E 2019 should be available in China in May. There’s no word on if or when it will hit international markets. 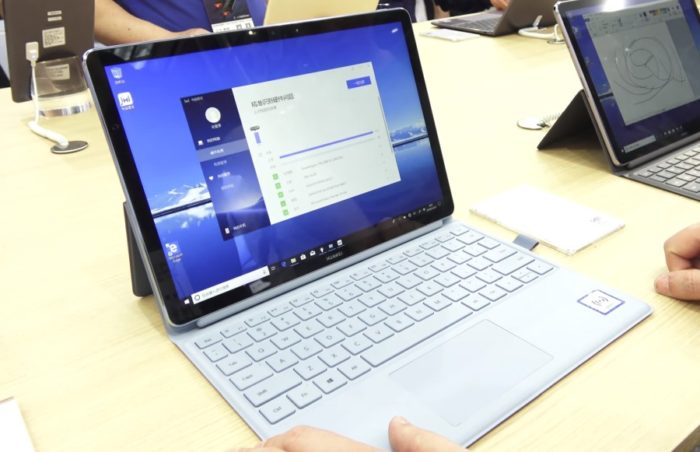 Other features include support for 4GB to 8GB of RAM, 128GB or 256GB of UFS storage, and support for a digital pen that features 2048 levels of pressure sensitivity.

The tablet itself weighs about 1.5 pounds and measures about a third of an inch thick. Add the keyboard cover and the weigh is closer to 2.2 pounds.

The computer is fanless, supports 4G LTE as well as 802.11ac WiFi, Bluetooth 4.1, and NFC. It features a 13MP rear camera, a 5MP front-facing camera, a USB Type-C port, a 3.5mm audio jack, and a fingerprint sensor. There are stereo speakers with Dolby Atmos sound.

The Matebook E 2019 also features a 36.3 Wh battery that the company says should be good for up to 20 hours of usage, although that obviously depends on what you’re using the tablet to do.

Overall, the computer seems like an interesting new addition to the Windows on ARM space, but there are a few features it lacks. There’s no backlit keyboard or microSD card reader. Not all Win32 applications can run on computers with ARM chips. And while the Snapdragon 850 processor offers a significant performance boost over the Snapdragon 835 chip that powered first-gen Windows on ARM hardware, it still lags behind recent low-power Intel chips in benchmarks.

You can check out Notebook Italia’s hands-on video with the Matebook E 2019 below if you want to get a better idea of what the new 2-in-1 tablet looks like. The video’s in Italian, but hands-on videos have a sort of universal language all their own.