Google has released Android Q Beta 2 for developers and Pixel smartphone-owning early adopters. In addition to many of the features introduced in the initial beta that was released last month, the new update includes a bunch of optimizations, bug fixes, and new features for developers.

There are also some changes that could affect the way we use our smartphones in the future. 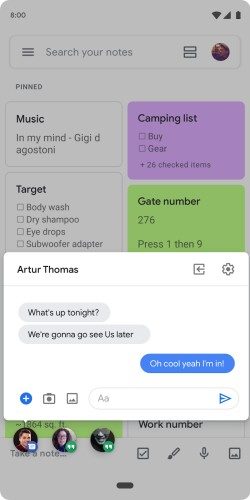 Android Q now supports a new “bubbles” multitasking mode. Bubbles allow you to interact with an app in a small pop-up window that floats on top of other apps you’re already viewing.

For example, chat bubbles could show you floating icons for conversations taking place in an SMS or chat app. Tap one to open that conversation without losing view of the app you were using. Tap it again to minimize.

Google says Bubbles can also be useful for showing notes, translations, or tasks, among other things.

Developers need to enable support for Bubbles, so it might be a while before the new feature is widely adapted. But it’s built on top of Android’s existing notification system, so it shouldn’t be too difficult for developers to enable support.

If the idea behind bubbles sounds familiar, that’s because we’ve seen it before — 6 years ago. Facebook introduced a similar feature called “Chat Heads” with its Facebook Home app for Android way back in 2013. The folks behind the Paranoid Android custom ROM expanded on the idea with their “Halo” feature. And now, more than half a decade later, it seems like Google is creating a system-wide version of Chat Heads for the next version of Android.

Update: It looks like Bubbles will still be a developer preview feature when Android Q stable is released, so while it’ll be enabled by default in Android Q beta builds, you’ll have to manually enable it from Developer Options when Android 10 ships later this year.

The second beta also introduces a new form of gesture navigation that lets you swipe left or right on the bottom of the screen to switch between running apps.

When you press the volume keys on the side of your device, you’ll also see a new settings button at the bottom of the pop-out volume slider. Tap it and Android Q will show separate volume sliders for media, calls, alarms, and phone ringing.

Android Q Beta 2 also turns on Scoped Storage for new apps you install, allowing developers (and other users) to see how the new storage permissions may affect usage.

In terms of developer tools, there’s now a Foldables emulator that helps developers see how their apps will look on smartphones and other Android devices with foldable displays.

And there’s also support for a new Microphone Direction API that lets an app specify which microphone to activate (front or rear, for example) depending on a variety of circumstances.

You can read more about changes in Android Q Beta 2 at the Android Developers blog.

The latest beta is available for Google Pixel 3, Pixel 2, and first-gen Pixel smartphones. You can sign up for the Android Beta program to receive the operating system as an over-the-air update, or download the latest image for your device. Just keep in mind that this is pre-release, buggy software. You probably aren’t going to want to use it as your primary smartphone operating system just yet.