The folks at Pine64 are working on a Linux-powered smartphone that could sell for as little as $149. It’s called the PinePhone, and the team unveiled the project and launched a development kit earlier this year.

Now that developers are starting to work with that pre-release hardware, we’re getting our first look at what the phone could look like when it’s running GNU/Linux-based software.

Photos of a dev kit booting PostMarketOS with the KDE Plasma Mobile user interface were posted recently to the PinePhone developers Telegram group. 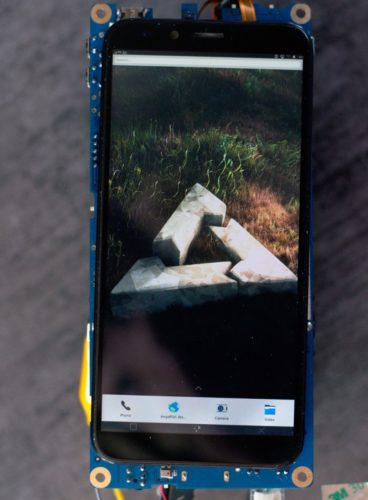 There’s nothing all that surprising in the photos… but it’s nice to see that it works. Plasma Mobile is a touch-friendly user environment from the folks who make the KDE desktop environment. It has touch-friendly icons along the bottom of the screen for quick access to features like the phone app, camera app, file manager, and web browser.

As for the PinePhone itself, a prototype is expected in the third quarter of 2019, and Pine64 hopes to ship the phone in the fourth quarter of the year, assuming software is ready by then.

It has a 5MP rear camera and 2MP front camera, a headphone jack, and a microSD card reader. There may also be privacy features such as physical kill switches for the wireless hardware, cameras, and speakers.

While the PinePhone certainly won’t be the most powerful smartphone on the market by the time it’s ready for release, it will be a lot cheaper than some of the other GNU/Linux phones in the works, such as Purism’s Librem 5, which is up for pre-order for $649.