Three and a half years after after introducing an 18.4 inch Android tablet (or “mobile entertainment device”) called the Samsung Galaxy View, it looks like Samsung may be ready to offer a follow-up.

SamMobile has published a set of leaked photos and some specs for a device that the website says is the Samsung Galaxy View 2. 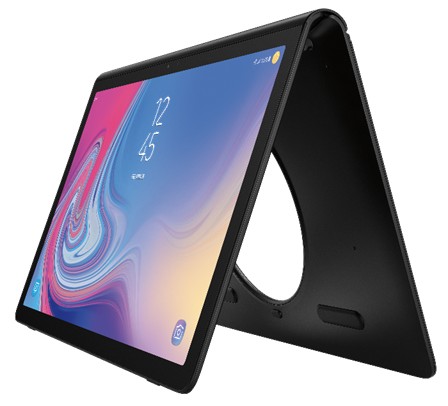 It’s a little smaller than its predecessor, thanks to a slightly smaller display. The kickstand has also been redesigned so that the device doesn’t actually lie flat when it’s folded up, it rests at a 30 degree angle instead, which could make it easier to use the Galaxy View 2 when it’s lying on a table or on your lap.

You can also unfold the kickstand to prop up the device so it stands up at a more comfortable angle for watching videos, playing games, or making video calls, among other things.

Detailed specs aren’t available, nor is pricing. But SamMobile reports that there will be a version that supports AT&T’s network, although there may also be a WiFi-only version and/or an unlocked version that can be used with other networks.

According to benchmark results from earlier this year, the Galaxy View 2 may feature a Samsung Exynos 7885 processor and 3GB of RAM.

You can find more images at SamMobile.

4 replies on “17.5 inch Samsung Galaxy View tablet with a kickstand on the way? (leaks)”