Rumor has it that Motorola’s first phone with a foldable display will feature classic flip-phone style design and that it may even be sold under the classic Razr brand name.

While Samsung, Huawei, and other companies are using flexible display technology to produce phones that can be unfolded to become tablets, Motorola’s device will likely look like a normal phone when extended, and fold in half to take up less space in your pocket or bag.

But that doesn’t necessarily mean it’ll be useless when folded. The folks at xda-developers report that the phone has a secondary screen that lets you interact with the phone even when it’s closed… although you won’t get the full Android experience when using that screen on its own. But the phone’s two touchscreen displays will allegedly work together in some interesting ways. 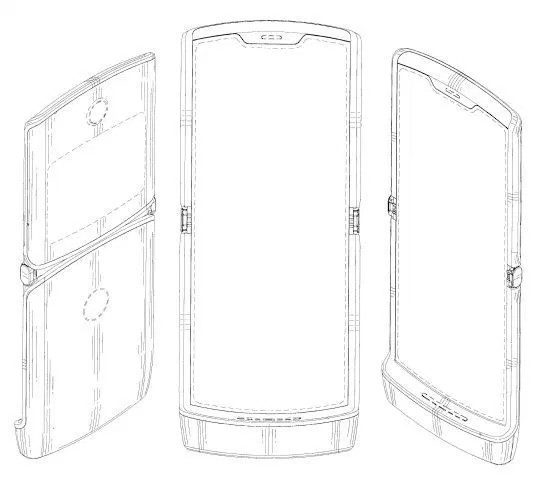 When the phone is folded in half, you’ll be able to use the smaller screen to view the time, date, notifications, and some other information. You can also see up to 6 Quick Settings tiles. And you may see the Google Assistant animation if you’re talking to Google’s voice service when the screen is closed.

Things get more interesting when you open the phone so that the “closed display” is on the back. When this happens, you can use the smaller screen as a touchpad, allowing you to do things like scroll through web pages by moving a finger along the back of the phone rather than by covering part of the screen on the front of the phone.

Or you can flip the phone around so that the small screen acts as a viewfinder while you’re snapping a selfie or making a video call. In this mode, you can tap the larger screen which is now on the “back” to snap a photo, essentially turning the big screen into a shutter button.

According to xda-developers, these details come from a single source, so I’d take them with a grain of salt for now. But they all sound pretty reasonable… especially from the company that first brought us the Moto Display suite of features that let you interact with a phone using the lockscreen.

It sounds like the company is basically extending the concept of Moto Display to take advantage of the secondary display as a more versatile version of the software-based Android lockscreen experience.

7 replies on “Report: Motorola’s foldable flip-phone will have a useful secondary screen”