You know how the SD Association just introduced a new MicroSD Express standard that would make it possible for next-gen microSD cards to offer speeds as high as 985 MB per second?

The CompactFlash Association just went a step further by unveiling a new CFexpress 2.0 specification with theoretical top speeds as high high as 4,000 MB/s.

I’m not aware of any cards quite that fast yet, but Sony’s new CFExpress Type-B cards can hit top read speeds of 1,700 MB/s and write speeds as high as 1,480 MB/s.

The only catch is that these cards aren’t going to end up in phones anytime soon — CompactFlash cards are larger than SD or microSD cards and are more commonly used in high-end cameras. 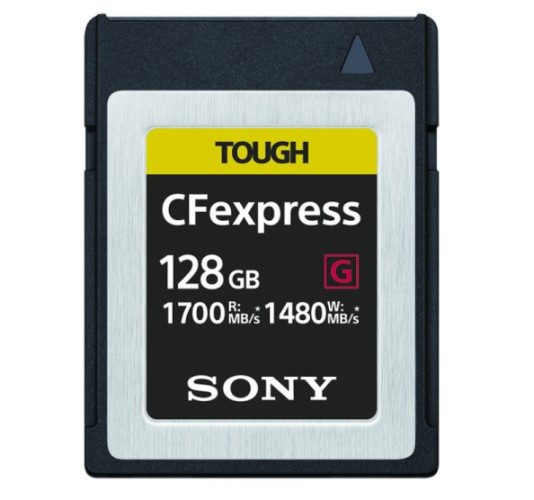 Sony says its new card is more than three times as fast as its fastest CFast memory card, which tops out at 530MB/s.

Of course, you don’t actually need a card that fast for more consumer-friendly cameras. But if you want to shoot higher-resolution, higher-bitrate video, the extra speed could come in handy.

Sony says the first CFexpress Type B card to ship will be a 128GB version, but 256GB and 512GB cards are also in the works.

While Sony’s cards are clearly aimed at professional cameras, the CompactFlash Association says other applications for new cards based on the CFexpress 2.0 standard include use for storing media, software, and files for servers and routers or as low-latency external, removable SSDs.

Type-B cards like the ones Sony is introducing are faster than many consumer SSDs, but not yet as fast as a PCIe NVMe solid state drive. But the CFExpress 2.0 Type-C standard supports a 4-lane PCIe Gen 3 interface and NVMe 1.3 stack for theoretical speeds as high as 4,000 MB/s, which is faster than most consumer SSDs.

In other words, maybe you’ll eventually be able to buy a computer that essentially has an SSD that you can pop out like any other memory card, allowing you to store important files, programs, or even the full operating system on swappable cards.

For now I suspect that’s something only enterprise customers are likely to be looking for. But it’s a neat idea that I wouldn’t mind seeing make its way to the consumer space. Instead of setting up multiple user profiles in the operating system running on your computer, you could just give each member of your household their own CF card that would store their entire operating system. Insert it into a laptop, tablet, or desktop and you boot into your environment. Remove it and nobody else can access your files.