Developer Felix Reiseberg released an app last year… that basically let you use a rough-around-the-edges version of Windows 95 as a standalone app that can run in Windows, Mac, or Linux.

There aren’t really a lot of reasons you’d want to do that, but it’s neat that you could. Now there are a few more reasons to give it a try though — Reiseberg has released a major update that brings a few key changes.

It has a couple of programs and games (including Doom) pre-installed. Sound works (it didn’t previously). And there’s 500MB of free disk space on the virtual disk that you can use for files or apps.

You can download the windows95 v.20 app for free from GitHub. 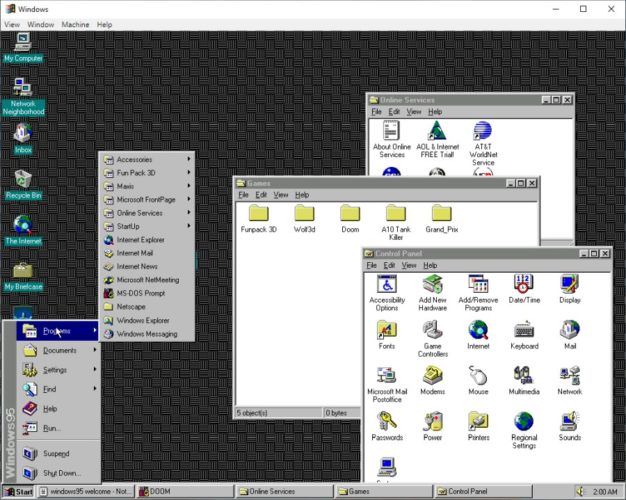 Basically the app is a virtual machine with a Windows 95 disk image and some pre-loaded software.

It’s based on an existing emulator coded in JavaScript and basically works like a web app. In fact, the user interface is running inside a single-window Chromium web browser, which becomes pretty clear if you open the developer tools, since you’ll see a window that looks identical to the developer tools in Chrome and Chromium.

The addition of sound and some pre-installed apps makes the whole thing a bit more usable than the version released last year. But I did find some of the games a bit too slow to be playable on my laptop with an Intel Core i5-8250U processor and 8GB of RAM. 3D games also seem to run at their native resolution, which means they’re confined to tiny windows on my 1080p display.

That said, it’s still a pretty nifty trick to shoehorn an emulator and operating system into an app that takes up less than 300MB of disk space. The program also launches almost instantaneously.

Version 2 includes games including Doom, Wolfenstein 3D, A10 Tank Killer, Grand Prix Circuit, and Funpack 3D and apps including FrontPage and Netscape Navigator 2.0 (although I couldn’t get it to open any websites).

As Ars Technica’s Peter Bright wrote when the software first gained attention last year, it’s unclear why this project hasn’t been removed from GitHub — it’s not like the developer has the rights to distribute an old version of Windows. That’s even more true now that it comes with more unlicensed software pre-installed.

But maybe the fact that this Windows 95-in-an-app isn’t actually useful for anything other than a trip down memory lane is keeping Microsoft and other companies that own the intellectual property being distributed from taking any action against the project.