The Moto G line of smartphones have a reputation for offering decent specs at reasonably low prices… which isn’t really as much of a distinguishing characteristic in 2019 as it was when the first Moto G smartphone launched in 2013.

All of which is to say that, as expected, Motorola is launching four new Moto G series phones today. They may not stand out quite as much as the original Moto G, but they do show that budget and mid-range devices today have specs that would have been considered premium a few years ago such as wide aspect-ratio displays, a decent amount of RAM, and fast charging. 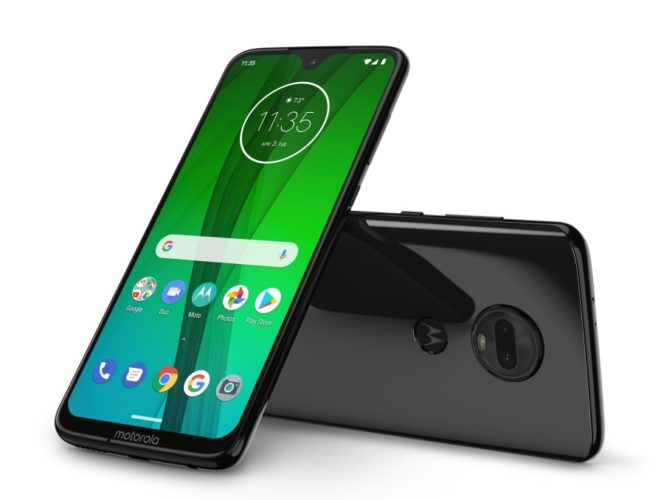 The 2019 Moto G lineup includes the Moto G7 Play, Moto G7, Moto G7 Power, and Moto G7 Plus. They’re all available starting today in Brazil and Mexico and will hit additional regions in the coming weeks and months — although only the first three will be coming to the United States.

All of the phones ship with Android 9 Pie and they all have microSD card readers, USB Type-C ports, fingerprint readers, FM radio support, and 3.5mm headphone jacks.

It also has a microSD card reader with support for up to 512GB of removable storage.

Other features include a 3,000 mAh battery, a 15 watt TurboPower charger, and a USB Type-C port.

The phone has a 12MP + 5MP dual rear camera system with support for 4K video recording, auto HDR, and other photographic features, plus an 8MP front-facing camera that also supports auto HDR.

This model has a lower-resolution screen, less memory and storage, but a much bigger battery, hence the “Power” moniker.

Motorola says you can get 9 hours of battery life from a 15 minute charge.

This is the most powerful of the bunch, in a few different ways. The Moto G7 Plus has the same 6.2 inch, 2270 x 1080 pixel display as the standard Moto G7, but under the hood it’s powered by a Qualcomm Snapdragon 636 processor for better performance, and it’s the only model in the series to come with a 27 watt TurboPower charger.

It’s also the only Moto G7 series smartphone to support 802.11ac WiFi, Bluetooth 5.0, NFC, and stereo speakers (all the other models have mono speakers).

So it’s a bit disappointing that this is the only model that won’t be available in the United States.

Other features include 4GB of RAM, 64GB of storage, a microSD card reader, a 16MP + 5MP rear camera system and 12MP front-facing camera.