It remains to be seen whether smartphones with slide-out keyboards are ready to make a comeback. But once upon a time Sony released a phone with a slide-out game controller section… But hacker The Phawx beat Sony to by a year, by slicing a bunch of keys off a phone with a sliding keyboard to build his own gaming phone.

At the time, he was using a state of the art smartphone. Today the Samsung Epic 4G is more than 8 years old… and that means you can pick one up really cheap on eBay.

That makes the idea of turning one into a handheld game console a lot less crazy today than it was in 2010. So The Phawx bought one and gave his classic hack another try. 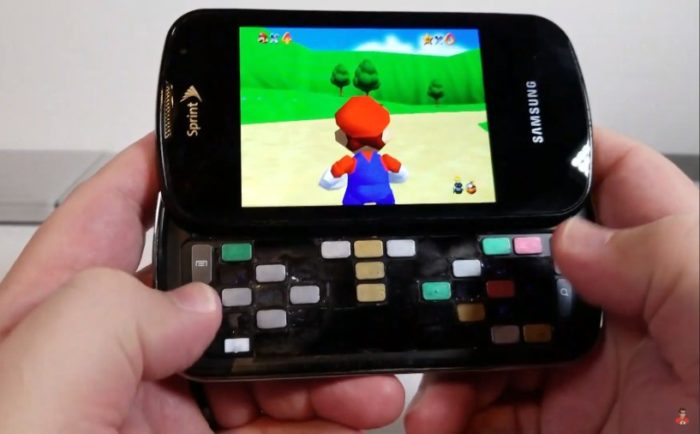 The hack is pretty basic — take a razor or X-ACTO knife and pry off all the keys you’re not going to use, then install a few game console emulators and map the controls to the remaining buttons.

For bonus points, you can use a marker (or paint) to color over the keys and (and the missing keys) to give the system a more consistent look.

The Samsung Epic 4G is an old phone with a 1 GHz, single-core, 32-bit ARM Cortex-A8 processor, 512MB of RAM, and just 512MB of internal storage space (plus a microSD card reader). But it looks like SNES and Nintendo 64 games run smoothly.

And while the 4 inch, 800 x 480 pixel display may seem kind of low-res by modern standards, it is an AMOLED display with excellent color quality (for a $13 phone).

The last official software update for the phone was based on Android 2.3, but The Phawx installed a custom ROM to bring the software up to Android 4.3 and enable overclocking (his phone is running at 1.2 GHz).

One tricky thing is that there’s no analog stick or actual D-pad, so you may have to use some creative button mapping for 3D games in order to get a full range of motion without cramping your fingers.