I’ve been pleasantly impressed with the audio quality you can get from a small Bluetooth speaker like the UE Mini Boom I’ve been using for the past few years. But it’s kind of tough to balance small size and big sound and a company called POW Audio has an unusual solution: an expandable/collapsible design.

The company’s Mo Bluetooth speaker measures about 4.4″ x 2.5″ x 1″ when collapsed, but it has a pop-out design that creates an air-filled chamber for better resonance that the company says results in better sound.

POW Audio will be showing off the Mo speaker at CES next week and it goes up for pre-order later this month for $100. The speaker should ship in February.

Update: The Mo speaker is now available for pre-order for $95. 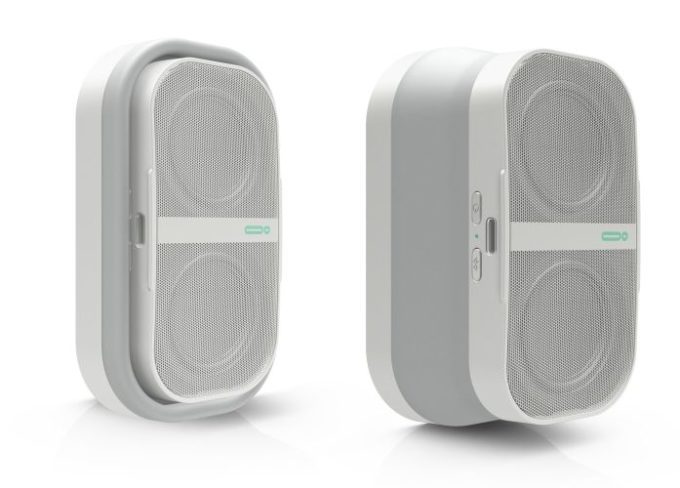 The Mo is just the first in POW Audio’s planned line of expandable speakers that use the company’s “WaveBloom” technology to create that air-filled chamber.

The speaker is available in white or graphite colors, offers up to 8 hours of playback on a charge, and has a water resistant design. It supports Bleutooth 4.0, charges via USB Type-C and supports stereo sync when used with a second speaker.

POW Audio also offers several mounts that allow you to attach the speaker to the back of a phone or mount it to a wall. The speaker itself weighs about 7 ounces.

At this point I have no idea if this thing delivers on its promise of offering big sound in a small package. But I’m intrigued by its odd design and will keep an eye out for it at CES.

Update: I did get a chance to check out the speaker at CES. The good news is that it feels more substantial in person than I’d expected, and I suspect it could survive being expanded and collapsed many times.

POW doesn’t really expect you to use it in collapsed form — that mode is really more about portability than audio playback, but I figured the simplest way to know whether the air chamber is useful is to hear what the speaker sounds like when it’s not in use. Unfortunately I don’t have a verdict.