But the compact design is only one of this notebook’s interesting features. 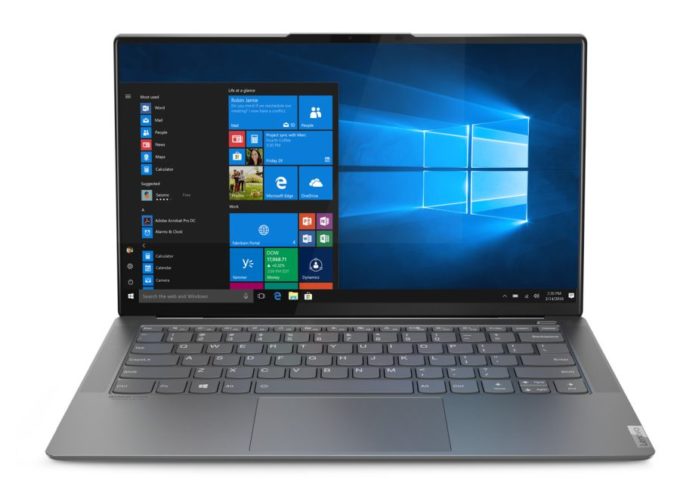 The display features something Lenovo calls “Contour Glass,” so it wraps around the edge of the display, making the screen look a bit like a larger version of Samsung’s Galaxy Edge displays.

The Yoga S940 also features proximity sensors so that the computer automatically locks when you walk away, and a sensor that can let you know if someone is looking at the screen over your shoulder.

Like the Asus ZenBook S13, it also has a lip that extends a bit past the front of the laptop when closed, making it a little easier to open the notebook. The lip isn’t quite as large the one Asus used, but it provides enough space for a webcam and an IR camera for Windows Hello face recognition (something the ZenBook S13 lacks).

The computer also has a fingerprint reader and a microphone array for far-field voice detection when you’re talking with Cortana or Alexa.

One thing the Yoga S940 doesn’t have? A 360 degree hinge. As announced last year, “Yoga” is just a meaningless word now. If you see a Lenovo Yoga device that doesn’t have a C at the start of its model number (for “convertible”) then it’s just a normal laptop.

The Lenovo Yoga S940 will be available with up to an 8th-gen Intel Core i7 Whiskey Lake processor, up to 16GB of RAM, and up to 1TB of storage.

It has two Thunderbolt 3 ports and an additional USB 3.1 type-C port, a headset jack and… that’s about it for ports.