Over the years PC makers have released Chromebooks with a number of different Intel processors. We’ve also seen some Chrome OS laptops with ARM-based chips from companies including Samsung, Rockchip, and MediaTek. But one thing we haven’t seen until now? An AMD-powered Chromebook.

That changes this year though, with companies including Acer and HP launching their Chromebooks featuring AMD chips. But they might not be the AMD chips you were hoping for.

The new HP Chromebook 14 is an entry-level device that replaces HP’s previous-gen models with Intel Celeron chips. It should be available this month for $269 and up. 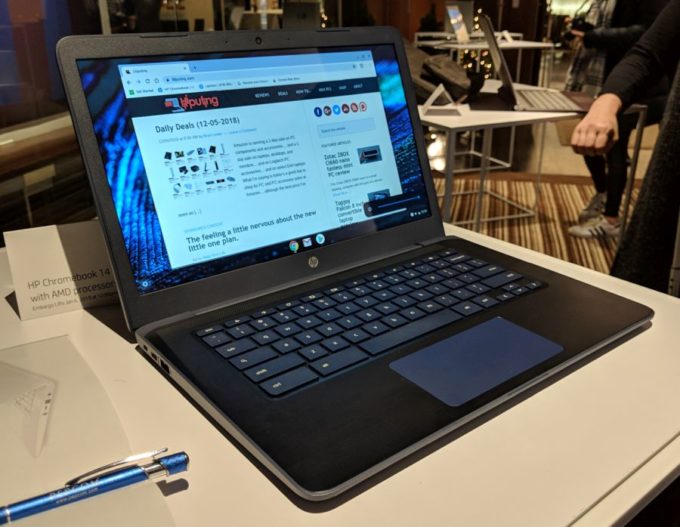 The computer has two USB 3.1 Gen 1 Type-C ports that can be used for data or power (the laptop comes with a USB-C charger). There are also two USB 2.0 Type-A ports, a headset jack, a microSD card reader, 802.11ac WiFi and Bluetooth 4.2.

HP equipped the new Chromebook 14 with dual array microphones and a front-facing camera, and the laptop has a 180 degree hinge for screen sharing in classrooms or meetings. 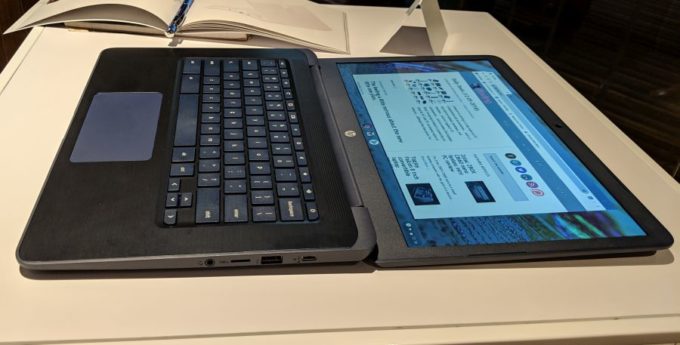 While the most noteworthy thing about this laptop is the processor, it’s also probably one of the HP Chromebook 14’s most underwhelming features.

AMD has just unveiled two new chips aimed at Chromebooks, and HP Chromebook 14 will be available with either one.

The entry-level model is powered by an AMD A4-9120C processor with Radeon R4 graphics, while a higher-priced version has a slightly faster A6-9220C chip with Radeon R5 graphics.

These are both 6 watt, 28nm, dual-core chips that are designed to compete with Intel’s entry-level Celeron and Pentium processors. While it’s a little tough to say just how well they’ll do that at this point, it’s interesting that AMD is only promising that its new processors will outperform 2-year-old Intel chips including the Celeron N3350 and Pentium N4200. 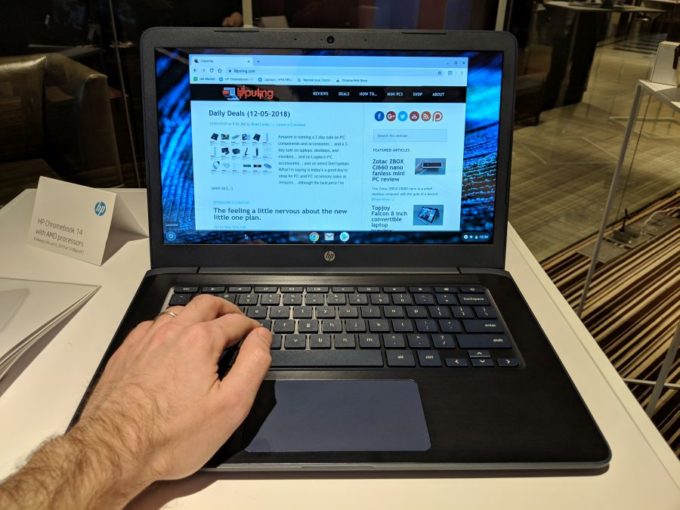 HP also plans to offer a model with a slightly higher-performance AMD A6 processor.

The laptop will be available in grey, blue, or white colors and the model I saw featured a touchscreen display, although it’s not clear if that will be a standard feature on all models.

A few other things to keep in mind are that it lacks a backlit keyboard, a high-resolution display and the RAM is not user upgradable.

Also please note that some details hadn’t been announced yet when I shot the video below, so I misstated that it has Radeon Vega graphics when it actually has Radeon R3 graphics.

Oh, and in case you’re wondering, this seems to be the Chromebook that has a board code-named “Careena” that we learned about last August.