The Nubia X is about as close to a truly bezel-free phone as I’ve ever seen. Sure, there are still some slim black borders around the screen, but they’re really, really small. In fact, the top bezel is so small that there’s no room for a camera. So Nubia put an extra display on the back.

Here’s the idea — flip the phone around and you can use the 16MP + 24MP rear cameras to snap selfies or make video calls. And you can line up your shot using a second screen on the back of the phone as your viewfinder.

You can switch screens by pressing the button in the camera app that you would normally use to switch from the rear camera to the front one. It’s just that on this phone it’s not the camera that changes, it’s the screen: and you don’t have to settle for using an inferior front camera when you’ve got a perfectly good set of cameras on the back of the phone.

Putting a second screen on the back of the phone allowed Nubia to make the front of the phone nearly all screen. But if you want to use the rear display for things other than monitoring your camera shots, you can do that too.

Just flip the phone around and it will automatically turn off the front screen and turn on the one on the back of the phone… which raises the question, does this phone actually have front and back sides? 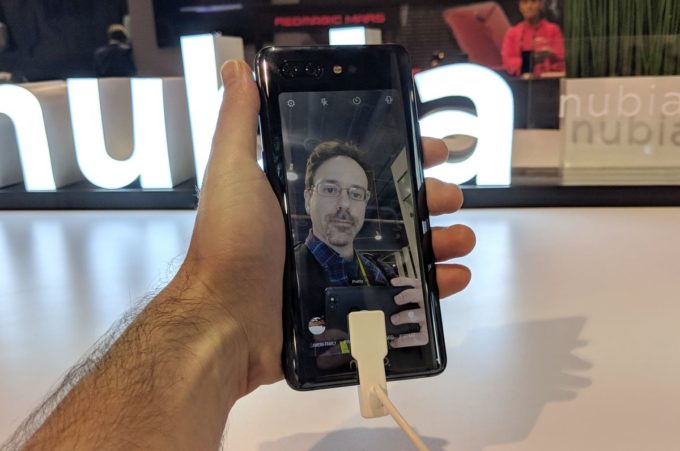 Another weird thing about the Nubia X is the fingerprint sensor. Actually, make that sensors. There are two of them — one on the left edge of the phone and another on the right. This makes sense when you think about the dual-display design.

Nubia began selling the phone in China late last year for about $475 and up. There’s no word on if or when it it will be available in other markets. But it’s not out of the realm of possibility. Nubia did announce this week that its Red Magic Mars gaming smartphone would be coming to Europe and North America soon, so maybe one day the company will decide to do the same with the Nubia X.

Overall it’s a pretty nifty phone and I’m glad I had a chance to check one out in person. But the front camera isn’t the only thing that this phone lacks: it has no headphone jack or microSD card reader.