The LG Gram line of devices have always been thin and light laptops, but up until now they’ve been just that: laptops. This year LG is releasing its first convertible tablet-style model with a touchscreen display and a 360-degree hinge.

First leaked (and then officially announced) in December, the LG Gram 2-in-1 is on display at the Consumer Electronics Show this week, and I got my first look at this 2.5 pound convertible with a 14 inch display and Wacom pen support. 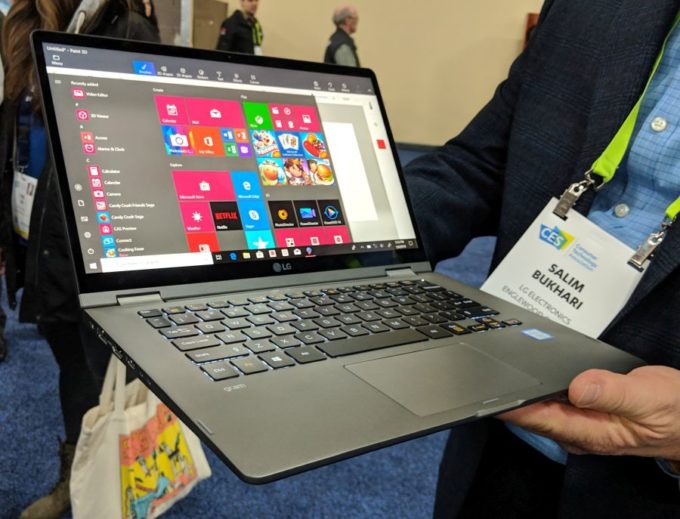 The laptop has relatively slim bezels, making it feel a bit small for a 14 inch device, while still giving you a bigger display than you’d typically get in a 2.5 pound laptop.

Despite the relatively compact size, there’s a full-sized HDMI port on the side, along with two USB 3.0 Type-A port, a USB-C port, and headset jack.

There’s also a power/sleep button on the side of the laptop, allowing you to turn off the display when using the computer in tablet mode. But there’s also a power button with an integrated fingerprint sensor in the upper right corner of the keyboard, where it’s more convenient to use in laptop mode.

I’m told that under the hood there’s an extra M.2 slot so you can add storage without removing the SSD that comes pre-installed.

The notebook is available with Intel Whiskey Lake processor options, up to 16GB of RAM and 512GB of storage, and it features a 1920 x 1080 pixel display, a 72 Wh battery, and a backlit keyboard.

While the computer comes with a Wacom pen for writing or drawing, there’s no good way to store the pen with the LG Gram 2-in-1 when it’s not in use. there’s no slot in the chassis for the pen and it’s not magnetic, so it won’t stick to the side of the computer. You might want to invest in a laptop sleeve with an extra pocket for the pen.