Laptops with 17 inch displays aren’t exactly known for being thin and light. But LG may just be setting out to change that perception. The new LG Gram 17 measures just 0.7 inches thick and weighs just 2.95 pounds.

The company says it didn’t skimp on battery power either — LG says the Gram 17 should get up to 19 hours of battery life. That estimate was arrived at by using the overly generous MobileMark 14 benchmark though, so expect real-world results to be maybe a bit more than half that.

First announced last month, the LG Gram 17 goes on sale this month for $1700 and I got a chance to spend a few minutes with one at CES this week. 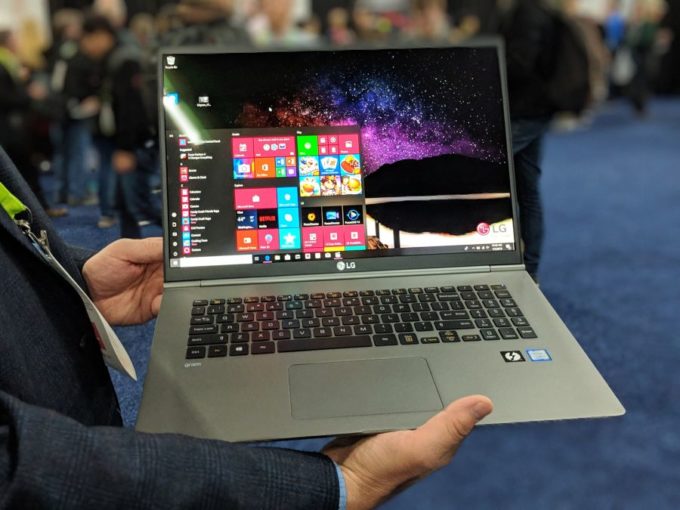 As expected, the most striking thing about the laptop is its light weight. I kept picking it up and putting it down, surprised at how light it felt in my hands. Sure, I’ve used laptops that weigh significantly less than this, but none have had a screen this big.

Like the LG Gram 15 I reviewed last year, the new 17 inch model has a magnesium alloy chassis, which is said to be both more durable and lighter weight than aluminum.

Also like the 15 inch model, the new LG Gram 17 has a backlit keyboard with a power button built into the upper right corner.

There’s also an extra M.2 slot for additional storage, and you can partially upgrade the RAM. I’m told that while there’s 8GB of it soldered in place, you can replace the other 8GB SODIMM with 16GB or more to increase the amount of storage in the laptop.

Note that the laptop does not have a touchscreen or edge-to-edge glass over the screen.

Measuring 15″ x 10.5″ x 0.7″, the laptop isn’t necessarily small enough to take with you everywhere you go. But when you do take it for a walk, you’ll find it’s light-weight enough that you might find yourself checking your backpack to see if you remembered to bring your laptop or not