Podcasts are typically meant to be listened to, but soon you may be able to read them as well. Google appears to be developing a feature that will let you tap a CC (Closed Captioning) button on your Android smartphone while listening to a podcast in order to see a transcript that syncs up with the audio as you listen.

The feature isn’t available to the public yet, but the folks at 9to5Google spotted the code when examining the latest version of the Google app for Android devices, and with a little work, they enabled were able to enable closed captioning and see it in action. 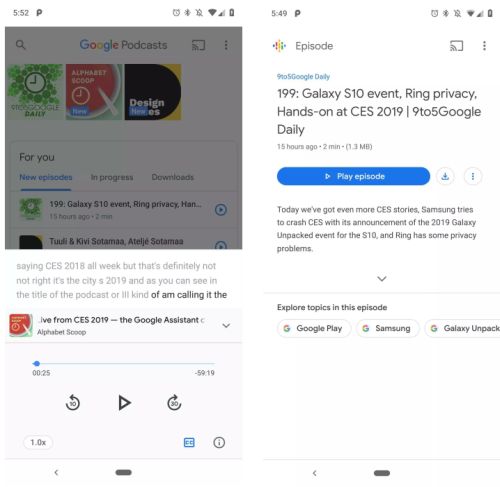 Google has been developing voice recognition software for years, and it’s obviously a key component of the company’s Google Assistant software which can respond to voice commands and questions. So it’s not a huge surprise that the company has the technical chops to pull this off. After all, Google already offers automated closed-captions for some YouTube videos.

But if you’ve ever tried reading the transcripts on those videos, you’ll know the results can often be imperfect.

Still, I can envision a few different situations where this would come in handy in a podcast app.

If you’re listening in a noisy environment, you may not always be able to make out every word that’s spoken in a podcast. Rather than rewind and crank up the volume, transcripts would let you glance at your phone to see what you missed.

Want to find a part of a podcast again? Transcripts could make it easier to find the part you were looking for visually. In fact, once a podcast is converted into a text format, it should theoretically be possible to search by keyword and start playing the appropriate section starting from that point… although it doesn’t seem like Google has added that functionality yet.

And transcripts could also make podcasts accessible to folks who might not otherwise be able to enjoy them, including people who are hard of hearing or who don’t speak the same language as the podcaster (again, it’s not clear that Google will offer translation, but it’s certainly possible from the company that brought us Google Translate).

One other feature that seems to be headed to Google Podcasts is a “explore topics in this episode” set of search suggestions. It’s unclear if these suggestions are based on content identified by the transcripts or if they just come from the show titles/show notes, but they certainly help explain why Google’s interested in the podcast space: the more you use Google Search, the more you’ll be exposed to ads… and the more money Google makes.

Obviously podcast transcripts aren’t going to appeal to everyone. People speak differently than they write, and often speech patterns don’t translate well to the written word. When my wife and I produced a limited-run podcast in 2017, the number one question we got about the project was when we were going to turn it into a book. Never, we said, because the interviews we recorded were most compelling in their original form.

I’d probably never recommend reading a podcast as a substitute for listening unless that’s your only option.

But as a companion, it could be useful for many people. At home we’ve taken to watching movies and TV shows with the caption on whenever we can, because it means we rarely have to turn up the volume or rewind to hear something we missed. Most of the time I don’t pay attention to the captions, but it’s nice to know they’re there when we need them.

As a podcast and radio producer, I’m also kind of curious to know if Google has any plans to offer automated transcription services to audio creators as well as consumers. There are a number of companies including Trint and Temi that allow you to upload an audio file and receive an automated transcript. The results aren’t perfect, but correcting a transcript is much faster than typing one from scratch — and whether you plan to make that transcript available to listeners or just use it internally for editing and reference purposes, I find transcripts to be a very valuable component of audio production. I wouldn’t mind seeing more competition in this space.