Over the past few months I’ve been hearing that shortages of Intel chips has been driving PC makers to consider alternatives. A representative from one Chinese PC company I spoke with at CES told me the company wouldn’t be able to get the Gemini Lake chips they need to bring their new product to market until mid-2019 at the soonest… and that the company expected run out of Apollo Lake chips for their current products by March.

Meanwhile another Chinese company seems to be hedging its bets. Computer manufacturer Emdoor currently offers a range of designs for Intel-powered Windows notebooks and convertibles. But the company plans to add AMD options in the coming year. 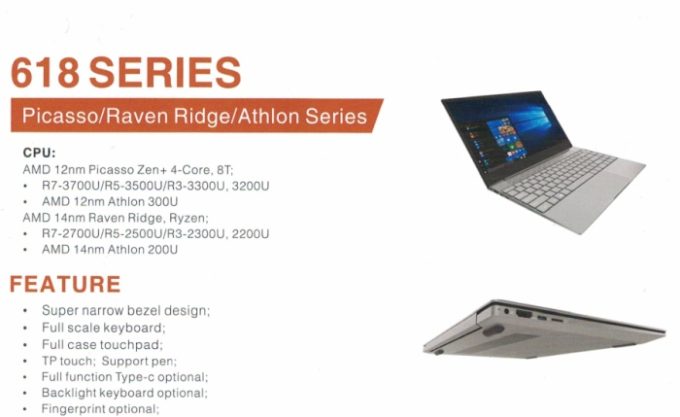 Some entry-level models will feature AMD “Stony Ridge” processors from 2016. That wasn’t a particularly great ear for AMD chips. But AMD made up a lot of ground over the past few years with the introduction of its new Zen architecture, and Emdoor’s roadmap also includes a number of designs that support AMD’s more recent “Raven Ridge” (Ryzen Mobile) and “Picasso” (2nd-gen Ryzen Mobile) processors.

For example, there’s the Emdoor EM-NP/NS13AP-H design for a laptop with a 13.3 inch display, support for up to a 1080p display, up to 8GB of onboard memory, and up to 512GB of solid state storage.

It measures 12.1″ x 8.3″ x 0.75″ and has a 45 Wh battery. Optional features include a backlit keyboard and fingerprint sensor, and the notebook has a narrow-bezel design.

All told these look pretty standard for the sort of notebooks and convertibles you’d expect to find in 2019. The most interesting thing about them is that they could feature any of AMD’s recent laptop chips, including:

You probably won’t see the Emdoor name on these computers if and when they hit the streets. Emdoor is a manufacturer that produces hardware for customers that sell it under their own names.