Odds are that it’ll be at least a few months before Google is ready to officially reveal the next major Android Update. But the folks at xda-developers appear to have gotten their hands on an early test build of Android Q.

After installing it on a Google Pixel 3 XL smartphone, they discovered a few of the new features that may be coming later this year… although there are no guarantees. Google does have a habit of testing features that don’t make it into the final release. 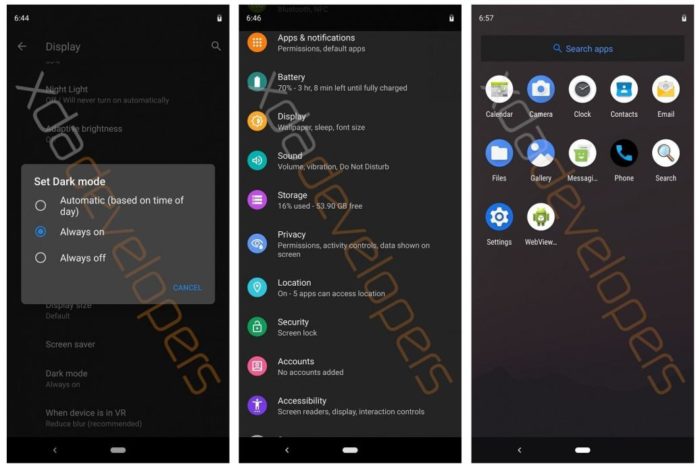 The biggest change for most users will likely be the system-wide dark mode, which has been in development for years. It shows up as a anew option in Display Settings and you can choose to have it enabled all the time or just at certain times of the day.

Some folks may find dark backgrounds and light text easier to view at night. Some may think it just looks better all the time. And if you have an OLED display, you might actually save some power by using dark mode, since it takes more energy to display white than black on such displays.

Dark mode seems to apply to most Google apps, but there also seems to be a feature that will force third party apps to use a dark theme even if they don’t natively have one.

Xda-developers also found code relating to an “experimental desktop mode on secondary displays,” suggesting Android Q could have some sort of Samsung DeX-like desktop feature that lets you use a phone like a desktop by plugging in a monitor. But it doesn’t seem to do anything yet.

Other changes in Android Q include updated Permissions settings that give you even more control over which apps can access which features… and when (like only when the app is open, for example), new accessibility and developer options, and a Quick Settings tile that lets you disable (or enable) all of your device’s sensors at once.