AMD’s first 7nm Ryzen processors are coming this year. The company has announced that it’ll begin shipping its the new desktop chips in mid-2019.

The numbers get a little confusing from there: we’re looking at the chip maker’s 3rd-Gen Ryzen chips with Zen 2 CPU cores.

And AMD showed off an early model that features an octa-core, CPU on a 7nm chiplet, but it’s paired with a 14nm I/O chiplet on the same package. So you get the efficiency and performance improvements of the new process node but the chip isn’t necessarily the tiniest thing you’ve ever seen. 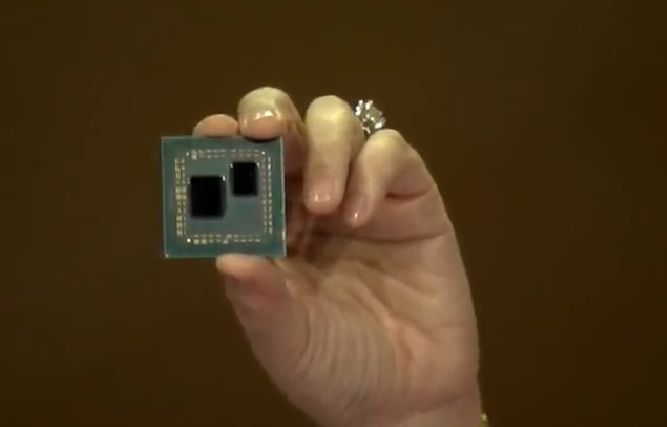 In fact, it’s designed to fit into the same AM4 socket as the company’s 2nd-gen Ryzen chips, so while there will be new motherboards coming this year, you can also upgrade your existing PC by replacing a 2nd-gen chip with a 3rd-gen.

More details will likely be available closer to launch, but AMD says the new processor is the first consumer CPU with support for PCIe 4.0 x16 (which will probably require a new motherboard).

Update: Maybe not. You might just need a BIOS update.

During a keynote presentation at the Consumer Electronics Show, AMD CEO Lisa Su pitted the upcoming processor against an Intel Core i9-9900K chip in a graphics rendering test using Cinebench. The scores were nearly identical (2023 for the AMD processor and 2042 for the Intel chip).

But here’s where it gets interesting — the computer with the AMD chip was consuming around 130 watts of power during the test, while the Intel rig was running at 180 watts. So you get similar performance and much better efficiency from the AMD processor… and AMD says it’s still an early version of the chip. The final version may run at different clock speeds.

AMD also introduces its first 7nm graphics card during the keynote. The upcoming AMD Radeon VII is a high-performance GPU with 16GB of dedicated memory, 1TB/s memory bandwidth, and up to 40 percent better performance than a Radeon RX Vega 64 graphics card, depending on the tasks.