Smartphones help us perform thousands of different tasks and keep us connected 24-7. Sometimes that’s more of a headache than a convenience. A new device offers a possible solution: leave your giant smartphone behind and tuck a giant pen-like thing in your pocket instead. 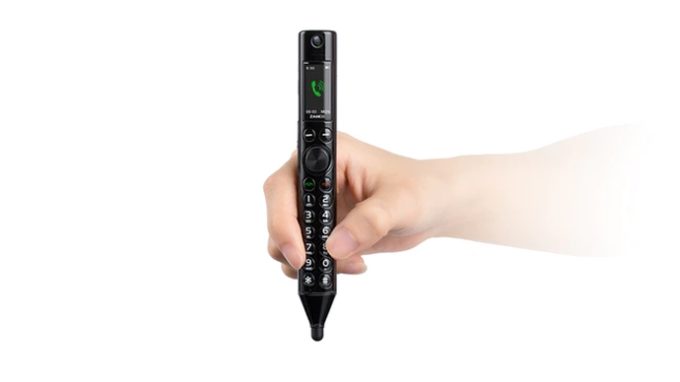 A company called Zanco has launched a Kickstarter project for a gadget they claim is “the world’s thinnest mobile phone.” It’s called the S-Pen, and while it’s actually a stylus and not a pen it really is a standalone phone. Pop a nano SIM in and you can leave your smartphone at home without being entirely disconnected.

There’s a lot happening on the outside of the S-Pen. It has a full phone keypad, a pair of shortcut keys, a five-way navigation pad, a microphone, earpiece and speaker, and both front- and rear-facing cameras. The S-Pen even has an integrated FM radio and a built-in laser pointer to help you underscore important points in your presentations… or mess with cats.

The S-Pen’s 1-inch TFT display gives you just enough information while keeping power consumption to a minimum. Zanco claims the 400mAh battery can keep the S-Pen powered for about 6 days.

That’s not just because of the tiny display, of course. It’s mostly because the S-Pen doesn’t run a bunch of power-hungry background apps that are constantly on the watch for push notifications and inbound messages.

The S-Pen isn’t meant to make you to give up your smartphone altogether. Its cameras are serviceable, but their VGA resolution isn’t enough to preserve memorable moments in any meaningful way. It is, nevertheless, an interesting companion device. Interesting enough that Zanco’s Kickstarter already has already banked five times its funding goal.

This is the kind of thing that you might have seen in a spy movie years ago. Maybe that’s why Zanco decided to ship the S-Pen with a voice changer. Yes, a voice changer. The S-Pen can disguise your voice 13 different ways. Not too shabby for a $49 pledge.