Intel is outlining a few big changes coming to its chips next year. First up is the new “Sunny Cove” architecture that’ll be used to produce next-gen Xeon (server) and Core (laptop and desktop) processors in late 2019.

The chip maker says we can expect higher caches, reduced latency, higher throughput, and support for performing more operations at once that will lead to a significant performance improvement… at least for some tasks.

For example, Intel is promising significant performance boosts for cryptography, compression and decompression, and machine learning (AI), among other things.

Sunny Cove represents the biggest architecture change since Intel’s 14nm Skylake chips first shipped in 2015. As AnandTech points out, the Kaby Lake, Coffee Lake, and Whiskey Lake chips Intel has released since then have all basically been variations on Skylake.

Intel’s new Sunny Cove chips will be 10nm processors and the first Intel Core processors based on the new architecture are set to ship in the second half of 2019, followed by “Willow Cove” chips in 2020 and “Golden Cove” in 2021. Those next next-gen chips will offer optimizations and security enhancements, but they’ll be based on the same basic Sunny Cove architecture.

And the company says it’s also developed a whole new way to builds CPUs — vertically. The company will use 3D stacking to make future chips more versatile by allowing designers to “‘mix and match’ technology IP blocks with various memory and I/O elements.”

The company says it will ship the first products built using its 3D stacking technology (called “Foveros”) in the second half of 2019. 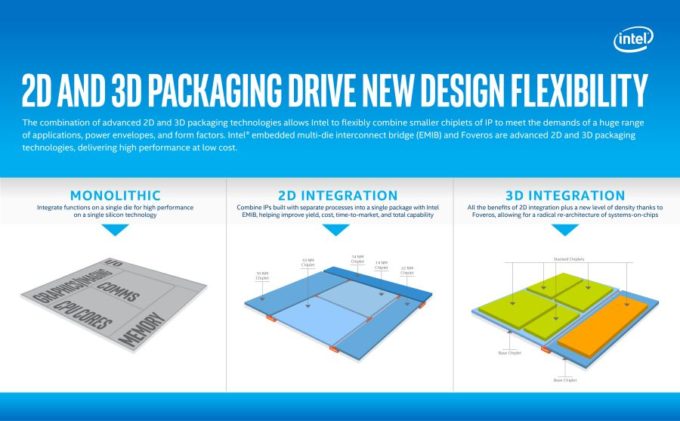 via Intel and Ars Technica