Most phone makers have embraced the notch in the past year or so. Even Samsung is rumored to be planning to launch phones with camera cut-outs in the display next year.

But you know what we haven’t seen yet? A phone with two notches.

Now notch-lovers in Japan can get their fill though. Sharp’s new Aquos R2 compact is a phone with cut-outs in the top and bottom of the display. 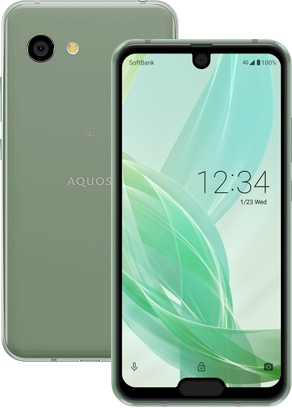 I mean, a bug sort of made some Pixel 3 XL phones look like they had one for a while, and ZTE kind of had one in the works, but the company has had a rough year and it’s unclear what happened to that phone.

But as for real phones with dual notches, the Aquos R2 compact appears to be the first.

The top notch wraps around the phone’s front-facing camera, while the bottom notch makes room for a fingerprint sensor. Sure, putting the sensor on the side or back of the phone would have probably made for an even bigger screen. But then there’d be nothing particularly remarkable about this phone and I probably wouldn’t be writing about it… for better or worse.

Actually that’s not entirely true — the Aquos R2 compact also has a 120 Hz screen refresh rate, making it one of only a handful of smartphones with that feature.

Going with dual notches and slim top and bottom bezels allowed Sharp to fit a 5.2 inch display into a phone that’s a tiny bit thinner and lighter than its predecessor: the original Sharp Aquos R compact had a 4.9 inch display, a top notch, and a big bottom bezel, yet it measured 1mm taller and 2mm wider than the new model.

The phone’s overall spec sheet doesn’t look too bad. The Sharp Aquos R2 compact has a 2280 x 1080 pixel display with HDR10 support, a Qualcomm Snapdragon 845 processor, 4GB of RAM, and 64GB of storage.

It has a microSD card slot, a 2,500 mAh battery and a USB Type-C port. There’s a 22.6MP camera on the back of the phone and an 8Mp camera on the front. And the phone ships with Android 9.0 Pie software and features a waterproof (IP68) design.