Google’s Pixel smartphones are known for having some of the best cameras of any smartphone — but that’s only partially due to high-quality hardware. Google also uses software to enable advanced features including electronic image stabilization, enhanced digital zoom, and bokeh-style background blurring without the use of a second camera.

One of the most impressive examples of computational photography is Google’s new “Night Sight” feature which allows you to take significantly brighter photos in dimly lit environments.

Google showcased the feature while unveiling the Google Pixel 3 smartphone, but it wasn’t available when the phone first hit the streets.

Now Google is rolling out an updated version of the Google Camera app with support for Night Sight. And not only does it work with the Pixel 3, but you can also use it on first and second-gen Pixel phones. 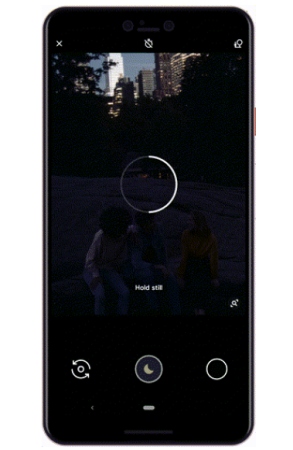 In order to use Night Sight, you just choose the Night option from the Google Camera menu. Then when you snap a picture in a dimly lit environment, the app will ask you to hold the camera still for a moment while it collects light.

Basically it’s capturing multiple frames and stitching together data from those frames to create a single image that’s brighter than any single picture would have been. You do need a relatively steady hand to prevent blurry photos, but it’s totally possible to do without a tripod.

Night Sight is rolling out now to Pixel users, but if you don’t want to wait you can download and install the latest Google Camera app from Android Police’s APKMirror site.

Note that this is the the real, official app and it’ll receive updates through the Google Play Store, unlike the unofficial, modified Google Camera app with Night Sight we wrote about a few weeks ago.