Windows has a file browser called Explorer. MacOS has Finder. And there are a number of similar tools for Linux and other desktop operating systems. But smartphone operating systems have been a little different… up until recently.

Apple only released an official Files app for iOS last year. And while there have been third-party file management apps for Android almost as long as Google’s mobile OS has been around, Google only got around to releasing a file management tool when it released the Files Go app for entry-level devices in late 2017.

Since then, Google has noticed that plenty of people have installed that app even on mid-range and high-end phones. So Google is renaming Files Go, giving it a visual update, and marketing it toward everyone.

The new Files by Google app is available as a free download from the Play Store. 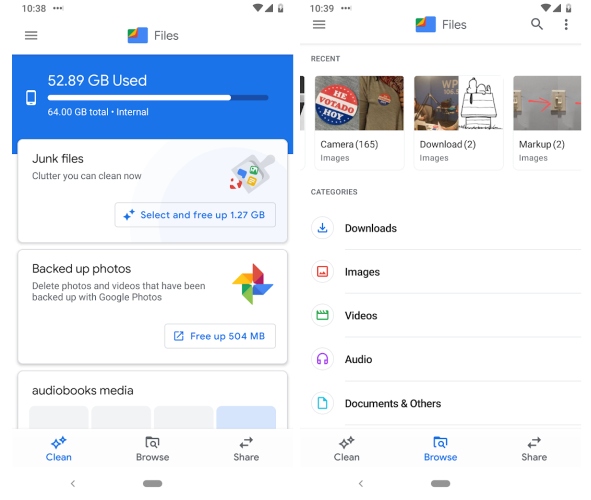 In a nutshell, the Files app does three things:

The Browse function isn’t quite as full featured as what you’ll find in some third-party apps like Solid Explorer or FX File Explorer. You don’t get access to every part of you’re device’s file system, and there’s no dual-panel support, for instance. But you can sift through files sorted into categories including Downloads, Images, Videos, Audio, and Documents & Others. You can also see a list of apps and APKs which you can uninstall or delete to free up space.

Or you can just go to the Clean tab and use the available tools to free up space by deleting “junk files,” photos that are already backed up at Google Photos, or other files that are taking up a lot of space on your device.

The Share tab lets you send files to nearby users by setting up a “fast hotspot” for point-to-point WiFi transfers. You’ll need to tap the “Send” button to get started, and have another device nearby and set to “Receive” to use this function.