Google’s Android operating system has had native support for multi-window features for a few years, allowing you to view two apps on the same screen. But now that multi-display/foldable display devices are on the horizon, it looks like Google is going to make multitasking on Android work a little more like it does on desktop operating systems.

That’s thanks to a new “multi-resume” feature coming to Android Q. 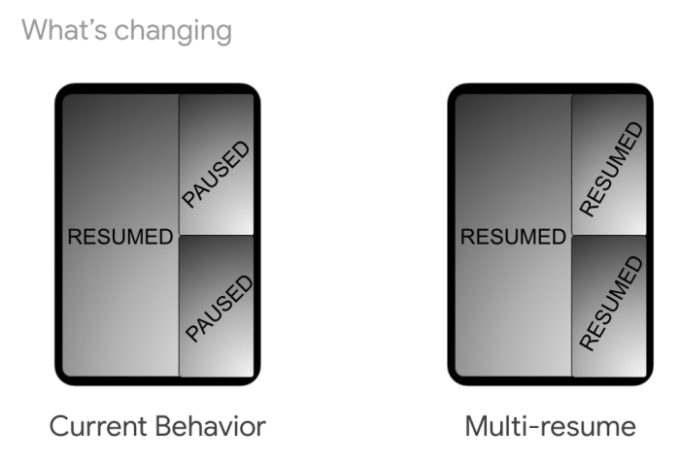 Up until now Android would generally let you see two apps at once, but you couldn’t necessarily interact with them both simultaneously. That’s because only one app is activate at any given time, and the other is paused.

You can tap on the paused app to “resume” using it at a moment’s notice. But you might not see the latest incoming messages or videos might stop playing.

The next version of Android will support “multi-resume,” which Google says will allow “device manufacturers to keep all apps resumed in multi-windows.”

In other words you might not see this on every phone at launch. It might not work with every app initially either — developers need to add a line of code in order to opt-in.

That makes sense, since there are some apps that probably don’t need to be active all the time in order to be useful. Forcing every single app that’s opened in multi-window mode to be in a resumed state could unnecessarily drain your battery or tax your system resources. But it also means that, at least at first, you may note that some apps won’t behave as expected in multi-window mode.

While multi-resume was clearly designed specifically for new types of devices such as foldables, it could also come in handy for phones and tablets with screens that are large enough to let you comfortably view multiple apps at once.

4 replies on “Android is gaining support for true multi-tasking”