The latest major update to Windows 10 didn’t exactly go as planned. But while beta testers are continuing to evaluate the Windows 10 October 2018 Update before it rolls out to the public, Microsoft has released a new preview build of the next version of Windows.

Windows 10 Insider Preview Build 18262 is rolling out now, and it includes a number of fixes, a few improvements, and two somewhat significant new features.

First is the ability to uninstall more of the apps that Microsoft preloads in Windows 10.

Previously you could uninstall the Weather, Tips, Skype, Print 3D, OneNote, My Office, and Microsoft Solitaire Collection apps if you didn’t want them taking up space on your computer. Now you can also remove the following pre-installed apps:

The other new feature should come in handy if you have a high-resolution display with a high pixel density and/or multiple displays with different resolutions/pixel densities.

It’s the ability to use the Task Manager to see which apps feature DPI awareness. Just right-click on any column in the task manager, choose the “Select Columns” section and then pick “DPI Awareness” to add the column. 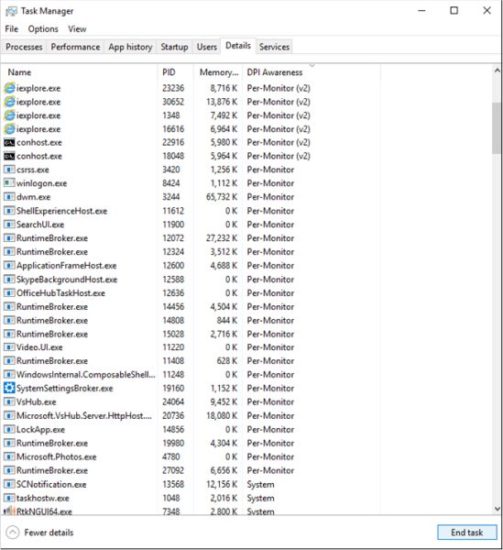 Microsoft has also added support for using Narrator to read sentence-by-sentence, with keyboard shortcuts to move to the next sentence, the previous sentence, or to have Narrator read the current sentence.

The company is also preparing to add a new troubleshooting feature that uses diagnostic data from your PC to automatically detect and fix known issues. It’s greyed out in the latest build because it’s not quite ready to go yet, but it shuld be coming soon.