The recorded music industry has gone through a lot of changes in the past few decades. Napster made piracy easy and fun in 1999. Apple convinced people to buy music again with the launch of iTunes in 2001. And these days Spotify, Apple, Google, Amazon and others offer myriad ways for you to stream as much music as you can handle for a monthly fee.

Before any of that happened, a small company named Nullsoft launched Winamp in 1997. It was a customizable music player that supported skins, plugins, music visualization features, and tools for organizing and playing your digital music library.

AOL bought Winamp in 1999… and didn’t really do much with it. the company announced plans to pull the plug on Winamp in 2013, but it was acquired by Radionomy… and more than four years later Radionomy finally plans to do something big with it. 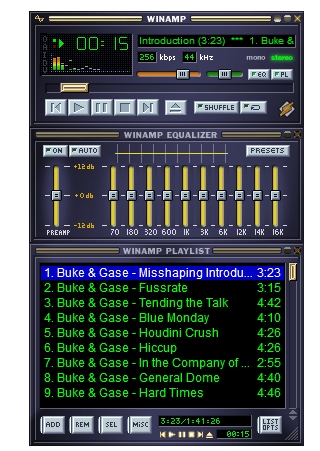 The company tells TechCrunch that it plans to launch an update to the aging desktop application soon: Winamp 5.8 will be released October 18th. But it’s a pretty minor update, all things considered.

Radionomy’s big plan is to release a totally new mobile app called Winamp 6 next year. It’s expected to be an all-in-one mobile app that you can use to listen to multiple types of content including:

The mobile app will support Android and iOS and it’s said to support playlists.

TechCrunch hints that the Winamp 6 could let you access content from Spotify, Google Music, Audible, podcasts, and your local music files all from one user interface. That would be kind of amazing… but it also requires working out some sort of deal with all of those companies — and they all have their own apps they want you to use. So there are probably some significant hurdles that need to be jumped before Radionomy can deliver on the promise of a unified audio experience for mobile users.