Palm is back… but not really. In November you’ll be able to buy a new smartphone called the Palm, and it’s designed to evoke some nostalgia for an era of smartphones past. But it’s not the Palm you knew.

The Palm features a small screen in an age of big-screened smartphones, and it’ll sell for $350 at a time when competitors are selling phones for as much as a thousand dollars (or more).

It’ll also be a Verizon exclusive at launch. 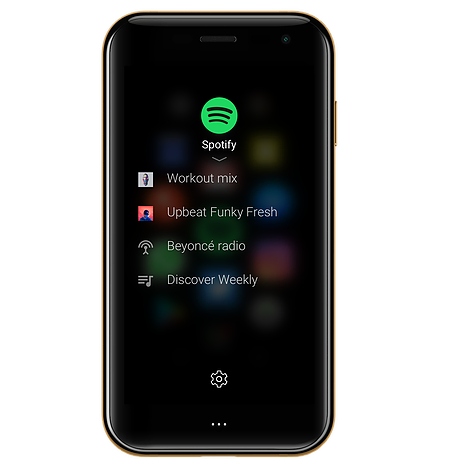 But while webOS was ahead of its time in some ways, Palm struggled and HP eventually bought the company, released its own webOS tablet… and failed spectacularly.

Now a California-based startup has acquired the Palm name and partnered with Chinese electronics giant TCL to manufacture new Palm-branded devices. TCL also makes most of the Android-powered BlackBerry-branded phones that are sold outside of India these days.

Anyway, the new Palm measures “about the size of a credit card,” at 3.8″ x 2″ and the phone has a 3.3 inch LCD display with 445 pixels per inch, a rounded design that feels reminiscent of the Palm Pre, and Android 8.1 with a custom user interface and app launcher that’s optimized for small screens (the user interface feels very Apple Watch-like).

Engadget’s Chris Velazco notes that it can be a little tough to type using an on-screen keyboard on a phone this small, and some apps (like the Google Play Store) are clearly not optimized for 3.3 inch displays. But keep in mind that the original iPhone had a 3.5 inch screen, and there were plenty of folks who claimed the typing experience on that phone was better than on Android devices with larger screens at the time. So it’s possible that the new Palm phone is just in need of a better software keyboard optimized for the small display (or maybe gesture-based typing is easier than tapping individual keys?)

The phone fatures a Qualcomm Snapdragon 435 processor, 3GB of RAM, 32GB of storage, and a 12MP rear camera and 8MP front-facing camera.

It’s rate IP68 for dust and water resistance, supports face unlock and Google Assistant, and has a Palm Grafiti-like feature that lets you scribble the first letter of an app or action to search for the appropriate item.

Palm will offer the phone in titanium and gold colors.

One of the most surprising things about this phone probably shouldn’t actually be a surprise: it has a tiny 800 mAh battery.

On the one hand, I’m not sure how the company would have crammed a larger battery into a phone this small. On the other hand, Palm is only promising about 8 hours of battery life.

You can extend your run time to 24-hours by disabling the wireless radios entirely by toggling “Life Mode,” but then you can’t use the phone to make calls, go online, or use GPS… so you might as well just turn your phone off altogether when you’re not using it.