At first glance the new Razer Phone 2 looks a lot like last year’s Razer Phone. But flip it over and you’ll notice the glass back which helps make wireless charging possible. And you’ll also see the RGB lighting that allows the Razer logo to light up: it can glow in 16.8 million different colors. 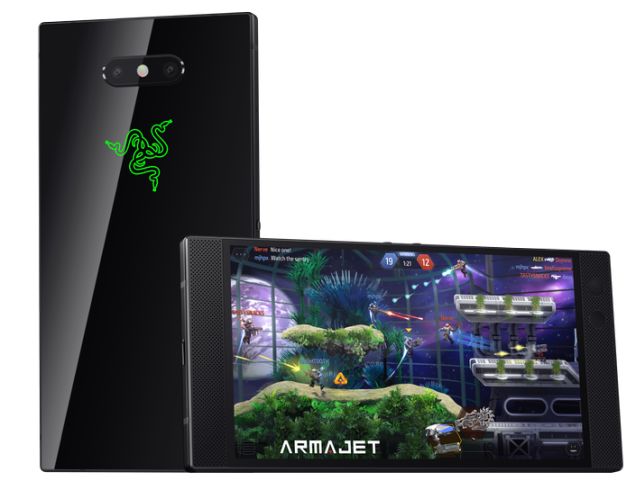 The new phone still has one signature feature that made the original Razer Phone distinctive: a 5.7 inch, 2560 x 1440 pixel IGZO display with a 120 Hz refresh rate. But Razer says the new model has a display that’s 50 percent brighter.

This year’s model is covered with Corning Gorilla Glass 5, an upgrade from Gorilla Glass 3. But for the most part the front of the phone hasn’t changed much.

In addition to the glass back and illuminated logo, there’s one other change to the back of the phone: dual cameras. The Razer Phone 2 features a 12MP primary camera with an f/1.75 aperture and optical image stabilization and a secondary 12MP 2X telephoto lens with an f/2.6 aperture.

The front-facing camera is an 8MP camera with an f/2.0 aperture.

Razer says the phone supports Qualcomm QuickCharge 4+ technology, allowing you to get a 50 percent charge in a half hour.

While the phone does not have a dedicated headphone jack, Razer will include a USB Type-C to 3.5mm adapter in the box.

The Raiju Mobile gamepad should be available later this year for $150, and the HammerHead USB-ANC is coming October 22nd for $100.