Hardkernel has been selling a line of single-board computers under the ODROID brand for years. So far most of them have featured ARM-based processors. But the company’s next product is a compact PC board featuring an Intel Celeron J4105 Gemini Lake processor.

The company has announced that the ODROID-H2 should go on sale in November and the price will be announced closer to the release date (but expect it to be over $100). 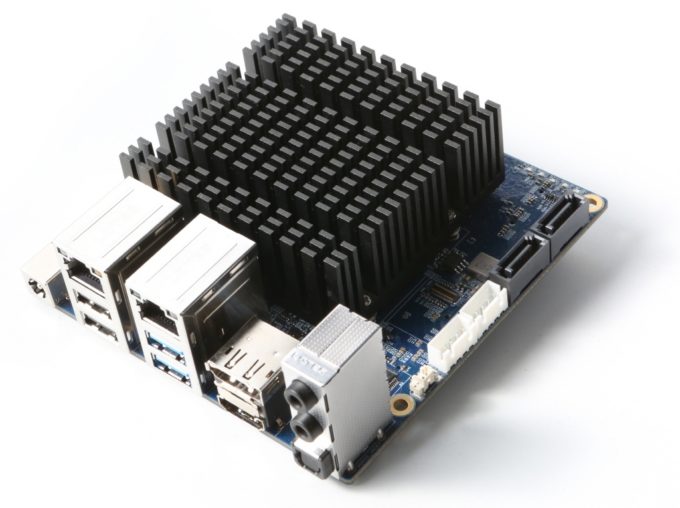 Hardkernel calls the ODROID-H2 a single-board computer, but I’m going to say it’s more of a mini PC board since it features two SODIMM slots for DDR4 RAM and multiple storage connectors.

In other words, unlike some similar mini PCs you’ll need to supply your own memory and storage — but you should have no problem finding compatible hardware since the ODROID-H2 uses the same kind of components commonly found in modern laptops.

The little computer measures 4.3″ x 4.3″ x 1.7″ which makes it about the same size as an Intel NUC mini computer. But the ODROID-H2 is sold without a case and it’s aimed at developers and enthusiasts.

There are plans to build optional case accessories though.

While the ODROID-H2 will be Hardkernel’s first computer with an x86 processor, the company has been working with x86 chips since 2015 since they tend to be better supported by the Linux kernel and other software including Wayland, Vulkan, OpenGL, and OpenCL. Basically there’s less chance that you’ll install a GNU/Linux distribution on a device like this only to find that there’s no support for hardware-accelerated graphics.

You could also probably install Windows (or even macOS).

The original plan had been to release a model with an Intel Atom x5-Z8500 processor, but the project was hit with a number of setbacks and eventually scrapped.

A year later the company developed an ODROID-H1 with an Intel Braswell N3160 processor and 8GB of onboard memory. It was “used for a dedicated project” but Hardkernel never released that model to the public because its specs were already looking dated by the time it was ready to ship.

So the company went back to the drawing board for the ODROID-H2. After considering the AMD Ryzen 5 2500U processor, the company decided to go with Intel’s Celeron J4105U chip instead. While it doesn’t offer the same level of performance, it’s significantly cheaper… but still much faster than previous-gen 6-10W Intel chips.