Huawei’s new Mate 20 and Mate 20 Pro smartphones are coming soon, and they’ll be some of the first Android devices powered by 7nm processors, Huawei’s latest phones with three cameras on the back, and the Pro model includes a couple of nifty new charging features.

It supports 40W fast charging with a wired charger: Huawei says you can get a 1 percent charge in just 30 seconds. There’s also support for 15W fast wireless charging, and the Mate 20 Pro also supports reverse wireless charging — you’ll be able to use your phone as a wireless charger for another phone if you want to share some of the power from the phone’s massive 4,200 battery.

The Huawei Mate 20 and Mate 20 Pro should be available later in October. 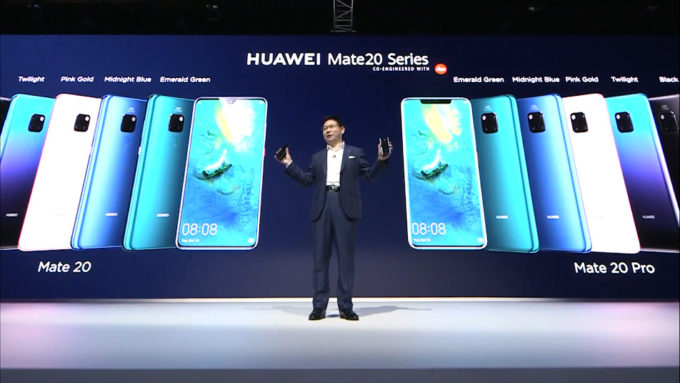 Both phones feature Huawei’s Kirin 980 processor, which is a 7nm, octa-core processor featuring:

The Mate 20 and Mate 20 Pro will ship with Android 9 Pie software and the EMUI 9.0. The phones feature 128GB of storage and have a “nanoSD” card slot, which sounds nifty until you realize it’s going to make finding compatible storage tough.

Eventually the goal is to make nanoSD into a new standard. For now, Huawei is working with Toshiba to offer cards up to 256GB.

There is one stand-out feature for the non-Pro model though: the Huawei Mate 20 has a 3.5mm headphone jack, while the Mate 20 Pro does not. It also has a smaller notch (since it lacks the 3D depth-sensing camera system on the front).

Here’s an overview of specs for each model: