There have been a handful of dual-screen smartphones over the years. The ZTE Axon M is a dual-screen phone that gives you an almost tablet-sized screen when unfolded. The Yota 3 has a full color screen on the front and an energy-efficient E Ink display on the back for reading eBooks or viewing persistent images when the primary display is off.

Now it looks like ZTE spinoff Nubia has a fresh take on the dual screen idea.

A video of a phone that’s said to be the Nubia Z18s shows a device with full color screens on both the front and back sides of the phone. Rumors that this phone was on the way started making the rounds earlier this summer with a set of leaked images.

The front of the phone has a large screen with slim bezels on all sides, giving the device a very modern look.

The secondary display on the back of the phone is much smaller, with large bezels surrounding it. But it’s still large enough to cover most of the phone’s rear panel.

It looks like there’s a dual camera system on the back of the phone, along with an LED flash and an ambient light sensor. On the front, there’s just a slim top bezel.

After all, why would you want to use an inferior selfie camera when you could use the phone’s primary camera system to snap shots or make video calls? Usually the only reason to prefer the front camera is that you can use the display as a viewfinder to frame your shot. But if there’s a screen on the back of the phone, then you can just us the camera on the back of the phone.

In other words… this may be an elaborate alternative to the camera cut-out or “notch” in the display found in so many other smartphones this year. Want slim bezels, but hate the notch? Get rid of the camera altogether… and replace it with a rear screen. 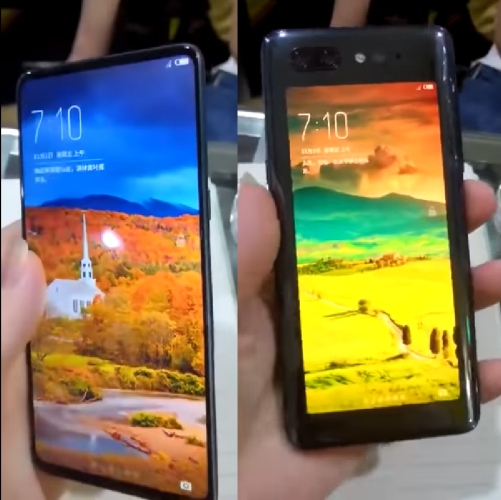 Of course, this opens up the question of whether phone makers that claim to have a 90 percent screen-to-body ratio are being disingenuous since they’re only considering the front of the phone. This may be one of the first phones with a true screen-to-body ratio of less than 50 percent.

There’s no word on how much Nubia’s dual-screen phone will cost, when it will go on sale, or even if it will ever come to market. But it’s certainly one of the more unusual phones I’ve seen this year.

via /r/Android and GSM Arena