Google launched its first Chromecast media streamer in 2013 and the company introduced an upgraded model with a faster processor and a new design in 2015.

Now it looks like the company is getting ready to launch a 3rd-gen Chromecast.

Redditor GroveStreetHomie went to Best Buy to pick up a Chromecast this weekend, and wound up getting what appears to be an unannounced new model rather than the 2nd-gen version that’s been available for the past few years. 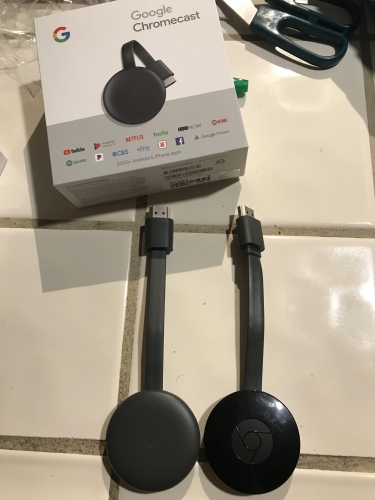 Unfortunately it’s impossible to set up the new Chromecast since it requires a new version of the Google Home app which hasn’t been released yet. But physically it looks a lot like the 2nd-gen Chromeast: both are circular devices with a built-in HDMI cable and connector that lets you plug the device into your TV and hang.

It’s reportedly a little thicker than the 2nd-gen model, but it still uses a micro USB port for power. And the Chrome logo has been replaced with a simple G for Google.

The Best Buy cashier had a difficult time processing the purchase because while the Chromecast was on the store shelf, the company’s inventory system said it had a release date of October 9th — which is the day Google is holding an event where the company is expected to unveil new phones, Chromebooks, and other devices (it sure looks like a new Chromecast is one of those new devices).

GroveStreetHomie wound up getting it for the same $35 price as a 2nd-gen Chromecast since the cashier used the SKU for the older model during checkout.

At this point it’s unclear if the 3rd-gen Chromecast supports 4K HDR content or has any other benefits or if it simply has a new design. But with Roku now selling 4K-ready media streamers for as little as $40, I wouldn’t be surprised to see Google, Amazon, and other competitors try to match or beat that price.

Up until now if you’ve wanted a 4K capable Chromecast, your only option has been the $69 Chromecast Ultra (which was released in 2016).

3 replies on “This could be the 3rd-gen Google Chromecast”