Chip maker Qualcomm’s Snapdragon Wear processors power most of the smartwatches on the market that run Google’s Wear OS software. But with the possible exception of the niche Snapdragon 2500 chip that launched this summer (for kid’s watches), it’s been more than two years since Qualcomm released a major update to its smartwatch chip lineup.

The new SoC isn’t expected to be significantly faster than its predecessor. But it is more energy efficient, which means you can probably expect longer battery life from next-gen smartwatches. 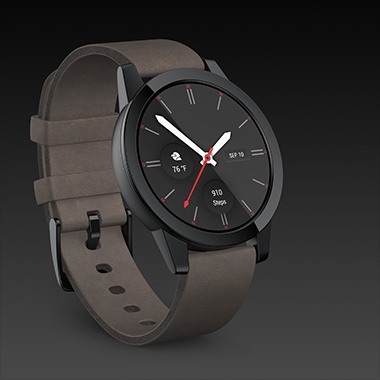 It’s that last part that could make the biggest difference, because it can handle many basic functions without waking the comparatively power hungry Cortex-A7 CPU.

For example there’s a new “Traditional Watch Mode” experience that will allow to use a smartwatch like a normal, non-connected watch and get up to a week of battery life (from a 450 mAh battery). There’s also a “Personalized Sports Experience” that should give you up to 15 hours of battery life while constantly using sports/health features including heart rate monitoring and GPS.

Another low-power mode made possible by the QCC1110 is a new “Enhanced Ambient Mode” that supports up to 16 colors, a smooth second-hand, improved brightness, and some live updates.

The Snapdragon Wear 3100 chip also includes a Snapdragon X5 LTE modem for cellular connectivity, WiFi, Bluetooth. NFC, GPS, and Adreno 304 graphics with support for screens with up to 640 x 480 pixels at 60 frames per second.

Some of the first companies expected to launch smartwatches featuring the new chip include Fossil, Louis Vuitton, and Montblanc.