The second generation of Windows 10 computers with Qualcomm Snapdragon processors is almost here — although only one has been announced to date.

Lenovo introduced the Yoga C630 WOS convertible laptop with a Snapdragon 850 processor a few weeks ago, and the company says it’ll be available in November for $850 and up.

I got a chance to spend a few minutes with a demo unit this evening, and it’s a pretty nice piece of hardware with a thin, light, and fanless design, an aluminum chassis, backlit keyboard, fingerprint sensor, and built-in support for 4G LTE.

Unfortunately it’s a little early to say whether the Snapdragon 850 delivers on its promise of 30 percent better performance than the Snapdragon 835 processor found in devices like the Asus NovaGo. 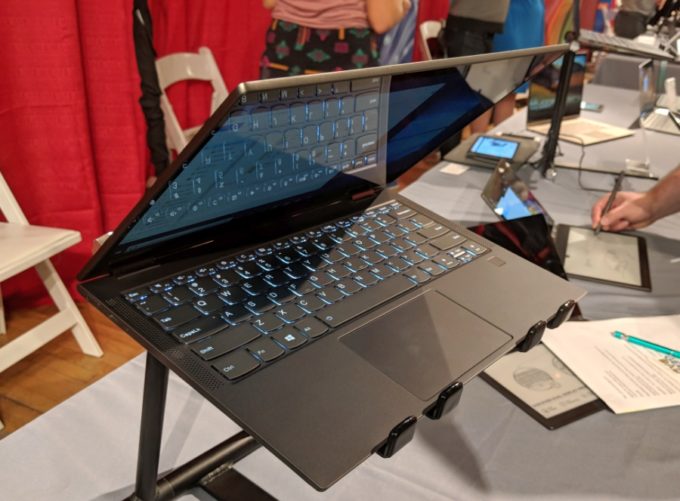 What I can say is that the Yoga 630 WOS feels like a much more portable machine than the Asus NovaGo.

They’re both convertible laptops with touchscreen displays and 360 degree hinges. But the Asus laptop I reviewed earlier this year weighs 3.1 pounds, measures 0.6 inches thick, and generally feels like a rather larger laptop.

Like the Asus NovaGo, the Lenovo Yoga C630 WOS has a 13.3 inch full HD display, but it has slimmer bezels and a more compact body that measures 0.5 inches thick and weighs 2.6 pounds. That might not sound like a big difference, but every little bit helps when you’re talking about a device that you might want to hold in your hands in tablet mode, and the Yoga C630 WOS does feel much more comfortable as a tablet… although I wouldn’t mind seeing Lenovo shave off another few ounces.

It might be hard to do that without eliminating one of the computer’s key selling points: long battery life. The company says you should get up to 25 hours of run time under ideal conditions. 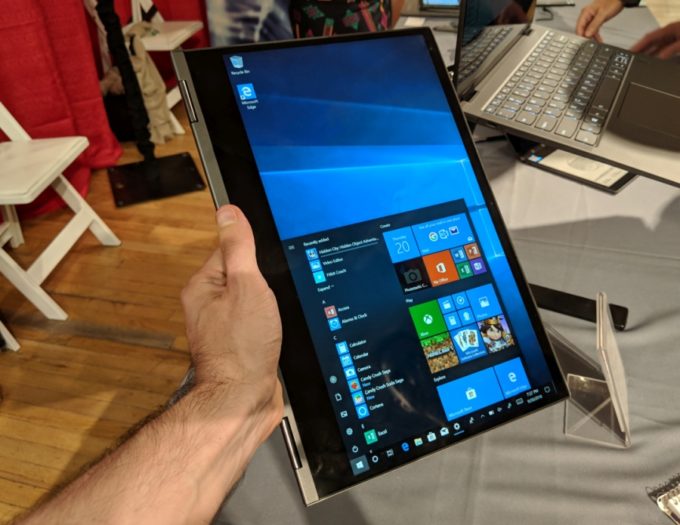 Real-world usage is likely to be significantly lower, but the Snapdragon 850 processor is basically a souped up version of the Snapdragon 845 chip that powers many of today’s flagship smartphones. It’s an energy-efficient chip that should last a long time with a laptop-sized battery… at least for light duty tasks like video playback, basic web browsing, or document editing.

Start running more CPU-intensive tasks and your battery life will probably start to decline… and you may also notice the limitations of Windows on ARM.

Out of the box, the Yoga C630 WOS ships with Windows 10 S. That means it will only run applications downloaded from the Microsoft Store. You can switch to Windows 10 Home for free and start installing third-party applications from other sources… but you won’t be able to run 64-bit x86 applications, and some 32-bit x86 apps may take a performance hit since the computer will have to emulate x86 architecture.

In my experience, the Snapdragon 835 processor wasn’t powerful enough to do that satisfactorily. I’ll be curious to see whether a 30 percent performance feels like in real-world usage. But it’s unlikely that you’d want to consider a Windows on Snapdragon device if your priority is super-speedy performance.

Instead the selling points are long battery life, instant-resume, always-connected capabilities (thanks to WiFi, LTE, and Windows 10’s Connected Standby mode that lets you receive notifications even when the computer is sleeping), and thin, light, fanless design.

Is that worth the relatively steep asking price? I guess that depends on what you’re looking for.

Maybe if Windows on ARM takes off, we’ll see a wider range of products at a wider range of price points. Right now the only model with a Snapdragon 850 processor is priced at $850 and up and it has the premium build quality to match. We’ll know more about whether it’s got sufficient performance to help justify the premium price closer to November, when Lenovo is ready to start shipping the Yoga C630 WOS.