Intel’s NUC line of tiny desktop computers have been around for years… and they’ve also inspired a bunch of third-party alternatives.

One of the latest is a Windows 10 mini PC called the AK3V which is a model that ships with 10 watt Intel Celeron J3455 quad-core “Apollo Lake” processor. 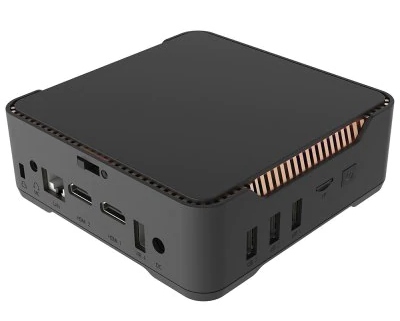 I have no first-hand experience with the AK3V, so I can’t say anything about how it stacks up against the NUC in terms of build quality or reliability. But if you’re willing to take the risk, the little PC does seem to offer a bit more bang for the buck, at least on paper.

The little PC has dual HDMI 1.4 ports, two USB 3.0 ports, two USB 2.0 ports, a Gigabit Ethernet jack, a microSD card reader, a headset jack and room under the hood for an optional hard drive or SSD. It supports dual-band WiFi and Bluetooth 4.1

Then again, the specs listed on Gearbest seem a little fishy in at least one respect: there’s a graphic suggesting that the computer supports up to three 4K displays thanks to two HDMI ports and a VGA port. Not only does there not seem to be a VGA port anywhere on the AK3V computer, but even if there was, VGA can’t handle 4K content anyway.