Chinese PC maker TopJoy produces a range of laptops, tablets, and mini PCs. Now the company is getting into the same mini-laptop space occupied by the GPD Pocket/Pocket 2 and the One Mix Yoga.

In fact, at first glance, the new TopJoy Falcon looks an awful lot like those products. But this convertible mini laptop has a larger screen and a keyboard with a bit more space between the keys. That might make it slightly less pocket-sized, but with an 8 inch display the TopJoy Falcon convertible laptop is still smaller than most modern notebook computers.

It should go up for pre-order in October through a Kickstarter campaign, and early backers might be able to reserve one for as littler as $399. The full retail price is expected to be closer to $699. 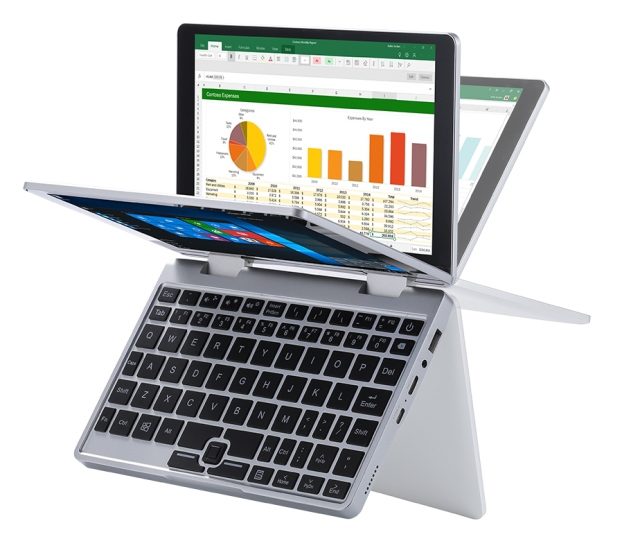 The little computer has an 8 inch, 1920 x 1200 pixel IPS touchscreen display with a 360-degree hinge, allowing you to use the Falcon as a notebook or a laptop. The hinge mechanism looks similar to the one on the One Mix Yoga.

The keyboard also looks similar to the One Mix Yoga/original GPD Pocket, with an optical touch sensor in the middle of a split space bar, and with left and right click buttons below it. There are also a bunch of half-width keys including the punctuation keys and Alt and Ctrl keys on the right side of the keyboard, but there’s a bit more space between these keys on the Falcon than on other mini-laptops, which might help reduce the risk of typos.

Other features are expected to include an Intel Pentium Silver 5000 processor, 8GB of RAM, 256GB of solid state storage, USB Type-A and USB Type-C ports, an HDMI port, and a 3.5mm headphone jack.

One thing to keep in mind: the pictures posted on the Falcon website seem to be pretty heavily Photoshopped, so it’s not entirely clear at this point whether the company has working prototypes or not.

That said, I was a little skeptical that the One Mix Yoga was a real thing when I first saw it pop up online, but it turned out to be very real.