Samsung’s latest flagship phone with a big screen display and digital pen is here. As expected, the Samsung Galaxy Note 9 features a 6.4 inch display with edge-to-edge curved glass, slim top and bottom bezels (and no notches), and support batteryfor up to 512GB of storage.

But that’s just the tip of the iceberg.

The phone also has the largest battery of any Galaxy Note to date, comes in more color options, and has an updated camera system.

All of those improvements come at a cost though… prices start at $999 for a model with 6GB of RAM and 128GB of storage. The Samsung Galaxy Note 9 goes up for pre-order today and it should start shipping August 24th. 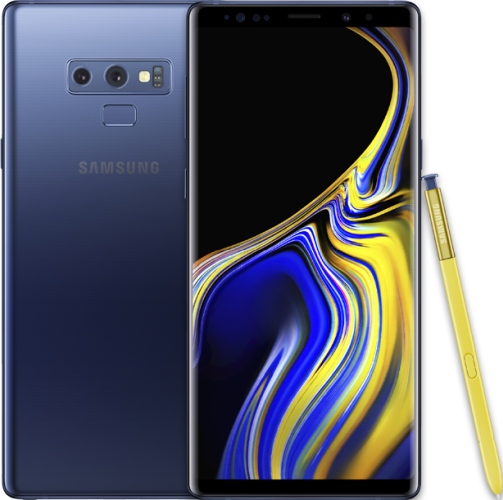 The Galaxy Note 9 has a 4,000 mAh battery, AKG-tuned stereo speakers (which Samsung says are the loudest yet on a Galaxy Note), and a fingerprint sensor on the back of the phone (the company moved it so that it’s below the dual camera system rather than next to it as on previous-gen devices).

Samsung is also introducing an updated Galaxy Note S-Pen with new features, including the ability to act as a remote camera shutter or media dremote control. Samsung showed off a demo using the S-Pen to snap a few selfies without touching the phone. You can also use it to play and pause YouTube videos, flip through PowerPoint slides, and more. 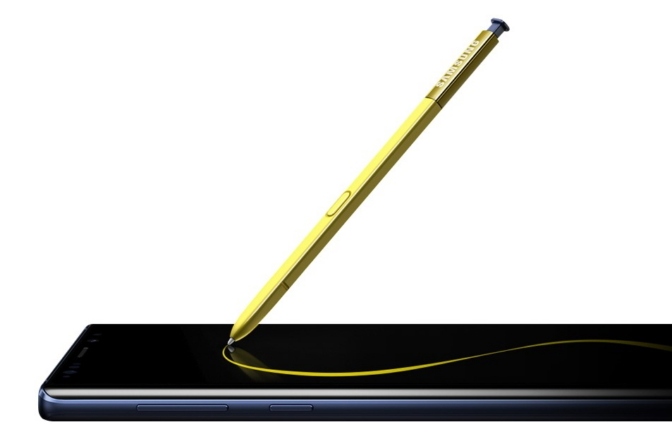 That’s because the new S-Pen is a Bluetooth-enabled device that you can use as a remote control/clicker. Samsung plans to launch an S-Pen SDK for developers.

You can still use the S-Pen as a pressure-sensitive for writing or drawing. And you can still store it in the phone when it’s not in use.

In fact, putting the pen in the smartphone will automatically charge the S-Pen’s . It only takes about a minute to fully charge the pen and get a half hour of Bluetooth use time. It doesn’t need to be charged at all for use as a writing/drawing tool.

Update: It turns out the pen doesn’t even have a battery. It has a supercapacitor, allowing it to charge quickly and take up less space… but which also explains why you only get 30 minutes of use at a time. That’s 30 minutes of standby time, not active use. But those limits only apply to Bluetooth functionality. The S-Pen works for writing and drawing even when it’s not charged.

Samsung has also updated its DeX platform which allows you to connect one of the company’s Android devices to an external display to run apps in a desktop-style view. 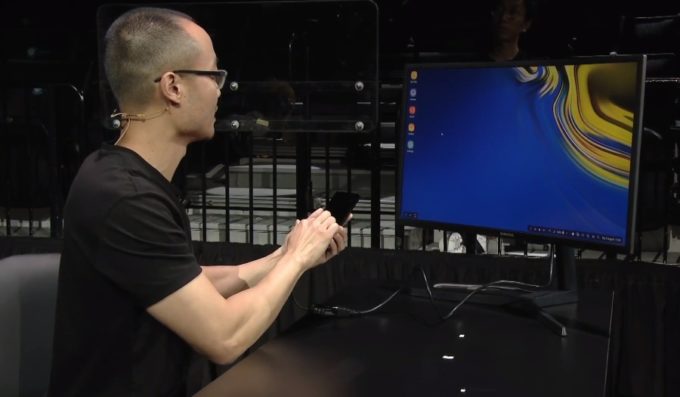 Previously you needed a specialized DeX docking station to use this feature. Now you just need an HDMI adapter, which allows you to run a cable from the phone’s USB Type-C port to a monitor.

You can use DeX to run apps in a multi-window view on the desktop monitor while using your phone as a touchpad. Or you can use your phone separately to run a mobile app on the handheld device while watching a video on the bigger screen.

Here’s a run-down of the Samsung Galaxy Note 9’s specs:

The phone will ship with Android 8.1 Oreo. There’s no word on when it will receive an update to Android 9 Pie.